IMLAY CITY — The Eastern Michigan Fair Board can open their record books and put 2022 at the top of the list. Fair Manager Ian Kempf has reported that gross gate sales were up 1.8 percent over last year when the most recent record was set.

“This is a new record breaker and we’re pretty happy about that,” Kempf said.

“The week was excellent and we had absolutely wonderful weather. The most important thing is that everybody came and had a good time.”

Kempf said there were no major incidents on the grounds or relating to traffic issues. Imlay City Police Chief Brett Selby’s decision to close Borland Road to all but local traffic “was a big help,” Kempf said.

The 2022 fair was also good to livestock exhibitors like Nico Masella of Imlay City. 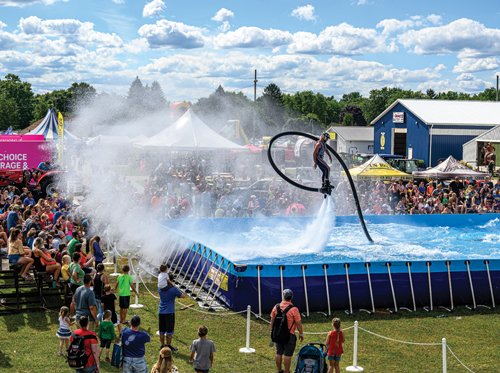 People in the crowd get a cool down, thanks to performers with the Jetpack Flying Water Circus.

“I was quite nervous at first,” he said of showing Pietro, “but I calmed down and it was a really fun experience. I will definitely be doing it again next year.”

After taking a few years’ break from participating, North Branch’s Wyley Hansen was back at the fair with his pair of hogs, Linda and Sparky. Above the pair’s pen were signs noting Wyley’s success as reserve champion senior showman and reserve champion market gilt.

“I’m really glad to be back,” Wyley said.

For six-year-old Muirinee Crawford of North Branch, the rides are the best part of the Eastern Michigan State Fair.

“My favorite is the carousel,” she said while feeding sheep in the FFA ‘A Living Experience’ barn on Saturday.

Her mom, Meghan Crawford, said coming to the fair is an annual tradition for them.

“It’s close to home and I like all the derby stuff they have,” she said, adding that they planned to stay for that night’s Demolition Derby.

During a break in heats at Saturday’s Demolition Derby, Kempf and fair board members recognized Lapeer County FFA Advisor Tammy Hyatt for her 32 years of service. Hyatt, who will be retiring later this year, has been instrumental in the growth of the fairgrounds and the programming offered, Kempf said.

“She was the one who had the idea and courage to launch the FFA petting zoo and Living Experience and turned it into a model for other FFA from around the state to use at their own local fairs,” he said.