IMLAY CITY — Downed electrical wires and a subsequent power outage at the Bancroft Street senior apartments on July 5, resulted in a 98-year-old female resident being trapped in a stalled elevator.

Imlay City Fire Chief Rick Horton reported that firefighters were dispatched to the Parkview Apartments at 421 Bancroft St. at around 7 p.m.

He said that when firefighters arrived at the scene, they found an elderly female resident trapped between the second and third floors of the senior apartment complex. 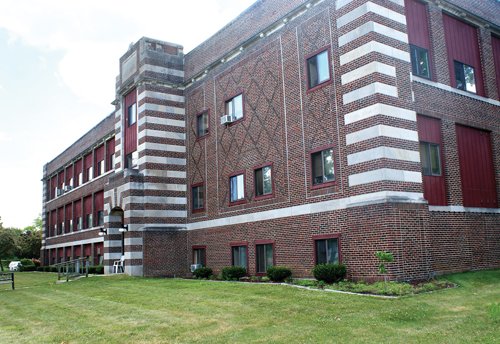 The Bancroft Street senior apartment complex is the residence of a 98-year-old woman who recently found herself trapped between floors in the elevator of the former school.

“We had voice contact with the resident the whole time,” Horton said. “She was fine, uninjured, and just hot. The hallways of the old school were very hot and stuffy.”

To accommodate the rescue, Horton said firefighters were able to force the outer metal doors open on the second floor and slide the inner doors open to allow the trapped resident to crawl over and sit on the edge of the elevator floor.

“Our crews helped the resident to the hallway floor, where she could sit down, get a cold drink, and be assisted by Lapeer County EMS personnel, who checked her over and found no injuries.

“She was then helped up the stairs to her third-floor apartment by our firefighters,” Horton said. “She was very happy to be out of that stuffy, hot dark elevator—calling the firefighters her heroes.”

After the incident, the elevator was temporarily placed out of service until an elevator maintenance crew could service it.

Horton added that DTE crew responded to the location the same evening to repair the wires and restore power to the area.