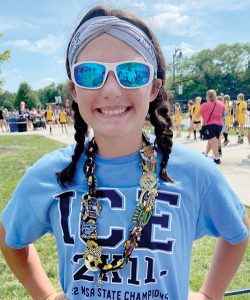 Almont’s Macie Stine poses for a photo at the World Series in Indiana.

ALMONT — ICE 10U Fastpitch softball team, which lists Almont’s Macie Stine on its roster, took fifth out of 11 entries at the NSA B-C World Series this past week.

Crown Point, Indiana is where the tournament was contested.

The team began their tournament run Wednesday with a 4-2 pool loss to Crown Point Bulldogs, who hailed from Indiana.

Later that day, ICE 10U Fastpitch bounced back with a 14-2 win at the expense of BBYSL, out of Ohio.

Thursday’s lone game saw the team drop a 1-0 verdict to Lady Crusaders, who hailed from Georgia. Their team featured the number one 10U pitcher in the state, throwing 56 MPH.

The following day ICE 10U Fastpitch registered a 7-2 victory over Krash (Michigan) and register a 6-1 triumph against Interlakes Pride (Michigan).

ICE 10U Fastpitch then wrapped up tournament action Saturday with a 2-1 loss to Midland Explorers.

Stine finished the tournament with a seven for 14 plate performance. She collected four singles, two doubles, a triple and five RBI along the way.