His property on Lothrop Road conjures up distant memories

GOODLAND TWP. — It’s not everyone that lives on a road named after himself and distant family members.

For Fred Lothrop, residing on Lothrop Rd. has been a big part of his personal and family’s legacy.

Fred, 81, says that ownership of the property at 6705 Lothrop Rd. dates back to his great-great grandfather, John Lothrop, who purchased the original 80-acre parcel in 1854.

He lamented that the property is now only half of its original size.

“My great-great grandfather lost 40 acres of the property in a poker game,” Fred said. “I still have the original abstract of title from the People’s Bank of Imlay City.”

Fred said he can recall picking berries on the property when he was about seven years old; and watching his great- grandfather plowing the family farm with a “one-bottom” plow.

He also remembers when the house didn’t have indoor plumbing and utilized a hand-pump for drinking water. 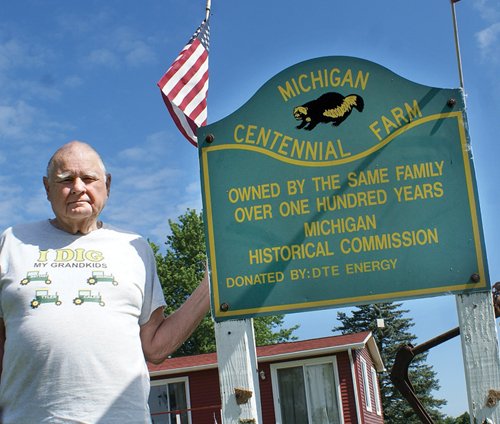 Eighty-one-year-old Fred stands proudly aside the historic marker installed in front of his current home at 6705 Lothrop Road.

“In the 1940s and 1950s, I can remember my neighbor Ron Cischke and I walking to the old Folsom School.

While Goodland Township has long been his home, Fred spent his early years in Almont and grduated from Almont High School in 1959.

Athletically inclined, Fred played both linebacker and halfback for Almont High School from 1956-1958.

After graduating from high school, he joined the U.S. Army and served in Germany.

In 1963, he married his wife of 53 years, Judy (Cline) Lothrop, who passed away in 2015 from complications assocated with diabetes.

Fred pointed out that life was difficult for Judy, who died seven years ago after losing her leg to the disease.

When the Covid-19 pandemic hit, Fred found solitary living not much to his liking, which is when his daughter Jennifer, 64, moved in to keep him company.

To occupy their time during the pandemic, both Fred and Jennifer turned to their shared hobby of making puzzles.

Today, many of those finished puzzles occupy the walls of every room of the house.

“Most of the puzzles have about 1,000 pieces,” Fred said. “I don’t want to do anything larger than that, because each one takes about three or four days to complete.”

“I love watching NASCAR,” he said, “and I like Star Trek and Marvel comics movies and stuff like that. I’m not so much into watching baseball and football games anymore.”

He does enjoy observing the “budding” and “blooming” of the decades-old rose bushes that have grown on the property since the time of the Civil War.

Among Fred’s most prized possessions is a 1865-vintage sword once owned by his great-great grandfather; and a 12-gauge Stevens shotgun that his father used to hunt with in the 1920s.

If all goes well, Fred hopes to live out the remainder of his years at the old homestead.

Needless to say, he won’t be betting the property’s future in a poker game.