Imlay, Arcadia, portion of Attica and city of Imlay City have choice of three

TRI-CITY AREA — Three Republicans are in the hunt to fill the District 5 seat on the Lapeer County Board of Commissioners—Katie Jostock Poniatowski, Ian Kempf and Truman Mast. 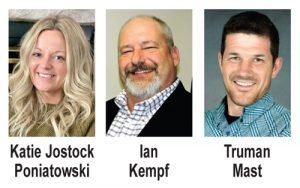 Whoever receives the most votes on August 2 will, beginning in January 2023, represent the townships of Arcadia, Imlay and a portion of Attica, plus the city of Imlay City on the county board. The district has a new look since maps were reconfigured last year with updated Census numbers.

Katie Jostock Poniatowski said she became interested in serving on the board after coming to understand the hardships her husband, a Lapeer County Sheriff deputy, and his co-workers have faced as a department.

If elected, Jostock Poniatowski said she would focus her efforts on bringing broadband internet to Lapeer County and address security at the county’s main facility.

“Broadband is something that this county needs. Currently it is in the beginning stages, and I hope to be a part of continuing that progression,” she said.

Jostock Poniatowski’s prior experience in government includes serving as a deputy clerk with both Arcadia Township and the county of Lapeer.

“I know what some of these departments need to function, and maintain a hard working staff,” she said.

“I am a lifelong resident of Lapeer County, my children are active in 4-H, I will bring a fresh perspective to the Lapeer County Board of Commissioners,” she added.

Ian Kempf said he’s seeking to return to the board of commissioners to serve Lapeer County residents.

“I believe my extensive experience serving as Lapeer County commissioner has shown a proven track record as a fiscally responsible commissioner with the ability to think outside the box while delivering essential services our citizens both need and deserve,” he said.

Kempf opted to not seek re-election in 2020 after having served as the District 7 commissioner for 20 years. At that time, the district encompassed the Imlay City and Almont areas.

If the voters choose him, Kempf said his time as a commissioner would be focused on public safety and first responders, seniors, veterans, and mental health.

“It is the job of the Commission to continually work with staff and other local, state and federal officials to deliver the highest quality of services in the most efficient manner,” he said.

“Simply raising taxes and throwing money at a problem rarely produces a positive outcome. Sound business principles and best practices must be weighed against every financial decision.”

Kempf said he’ll bring a range of experience to the position including his recent stints as interim manager for both the city of Yale and village of Almont, as a co-owner of Imlay City Florist with his wife Joi and his position as the Eastern Michigan State Fair manager for the last 27 years. Kempf notes that as both a county commissioner during the 2008 recession and upon becoming the fair manager, he has experience at overcoming tough times.

“I, along with a hard-working fair board, have taken the fairgrounds from near bankruptcy and disrepair to one of the most successful in the state,” he said.

Truman Mast decided to throw his hat in the ring to become more engaged in the community.

“After 2020 and COVID happened, I decided I need to do something,” he said.

After taking a biblical citizens class online and becoming involved with the Convention of States organization, those he interacted with encouraged him to consider running for public office.

“I think it is time for younger people to step up and play a part in it,” he said.

If elected, Mast would like to see the commission become more transparent and one way to do that would be consider holding board meetings at night. Currently the commission meets on Thursday mornings at 9 a.m.

“Having meetings at night would make it convenient for people to attend and so that people can better access their representatives,” he said.

Additionally, he would like to see the Lapeer County Sheriff’s Department better funded so they can raise wages and obtain the training and equipment they need.

“They are the only law enforcement agency that’s elected and they answer to us directly so they should be priority number one,” Mast added.

Mast operates his own business, served on the deacon board of his church and was a district captain with the Convention of States. He considers himself very disciplined with money and believes that’s a good trait to have as an elected official.