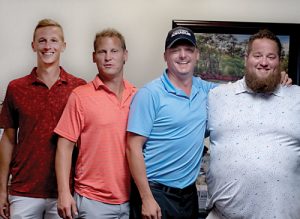 Holly Meadows Golf Course, in Capac, is where the tournament was contested.

A foursome of Chris Durand, Stan Sempf, Mike Savage and Adam Savage pulled up second that day. They posted a 14-under-par 58 total.

Kerr, Mailloux, Leonard, Barron, Bollaert and Palazzolo won $100 each for their efforts.

A total of 25 teams participated in the event which raised money for a scholarship which will go to a graduating Capac senior, that starting in 2023.

The Capac Class of 1981 would like to thank classmates, alumni, family, friends and the community who provided donations and sponsorships, helped in public awareness, purchased shirts and/or items on the online auction, volunteered or golfed in the scramble and attended the after gathering.