LAPEER COUNTY — Three Republicans are in the hunt to represent Goodland Township and the rest of District 2 on the Lapeer County Commission.

Incumbent Gary Roy is being challenged by Gary Howell and David Rouse. Whoever gets the most votes on August 2 will begin the new, two-year term in January 2023. 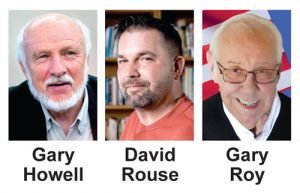 Gary Howell said he’s opted to put his name on the ballot because public service has been a lifelong commitment of his, mentioning his serving in the U.S. Army, a school board member and his two terms in the Michigan House of Representatives for Lapeer County’s 82nd District.

“Serving on the Board of Commissioners would allow me to once again give back to the community I call home,” Howell said.

If elected, Howell said he would advocate that American Rescue Plan Funds be used wisely.

“The funds should not be spent to hire more employees or to expand government. We should instead invest in capital improvements and better internet availability. Many of us living in rural Lapeer County have particularly bad internet service,” he said.

He would also like to see additional resources allocated toward law enforcement.

“Our rural areas are dependent on police agencies located far away. More local road patrol is essential. We are facing an explosion of drug activity that needs to be policed more aggressively,” Howell added.

As a county commission candidate, Howell said his diverse background well suits the district and county as a whole.

“The 2nd District is by far the largest and most agricultural district in Lapeer County. For over 40 years, my family and I have operated our 300 acre farm in the North Branch area. As the only candidate with direct farming experience, I am uniquely qualified to represent our rural community,” he said.

He has degrees in law and agricultural economics, plus time serving as a local township attorney.

“I have the necessary training to deal with the complex issues facing our county,” Howell added.

David Rouse said he’s seeking a seat on the board of commissioners because he believes it’s time for a change.

“Things are not going in the right direction and the board needs to stand up and fight for the people instead of just themselves,” he said.

He said he was upset when the board didn’t take a firm stand against mask mandates.

If elected, Rouse said he would want to address raising wages for law enforcement and first responders who he believes are all under paid.

As a business owner and entrepreneur, Rouse said he has experience running successful businesses.

“I have lots of leadership skills,” he added.

Gary Roy has served on the county board since 2006 and been it’s chairperson for the last 12 years.

Roy said he’s seeking re-election because he feels the board is in need of experience and leadership, particularly with the departure of several veteran members who opted to not seek re-election in 2022.

That experience includes handling budget challenges such as when the county saw their property values and revenues plummet by $1 billion in 2008 due to the Great Recession. Just this year Lapeer County’s property values returned to their pre-recession levels, Roy added.

“My priorities are with the county.”

In a new term, Roy said he would like to see the board focus on improving quality of life for residents, noting two things in particular—parks and recreation facilities and access to broadband internet.

“There’s nothing worse than someone not having internet access in today’s world,” Roy said.

“For kids especially it puts them at a disadvantage when it comes to education.”

Roy said the county is already in discussions to improve accessibility and he foresees it being an expensive, long-term project.

He would also like to see the county continue to invest federal pandemic dollars into the counties facilities and infrastructure.

Since the last election, redistricting has taken place and the boundaries of Lapeer County’s District 2 have changed.

When new commission terms commence in 2023, District 2 will include the townships of Goodland, Burnside, North Branch, Burlington, Rich and a portion of Deerfield Township.