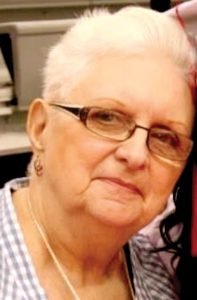 Sharron Alice Clark Davis, age 80, passed away on July 3, 2022, at her home surrounded by her family. Sharron was born March 30, 1942, in Capac, MI to the late Russell and Alice Clark. She married James Davis on February 15, 1969. They moved to Canton where they raised their family and lived until they retired to East Tawas, MI. Jim preceded her in death on February 8, 2017.

Sharron was also preceded in death by her brother, Glenn and Joanne Clark (MI); and her nephew, Michael Clark (MI).

Sharron worked many years as a hairdresser and taught at Bruno’s Academy of Beauty until she retired in 2000. Sharron also enjoyed crocheting, knitting, and needle point. She would never miss an episode of Golden Girls, or a favored murder mystery. She loved Elvis Presley to a fault and enjoyed her home shopping networks. She loved her family and enjoyed spending time with her grandkids and telling stories of her youth.

A memorial and celebration of life for both Sharron and Jim will be held later this fall. Place of Rest will be at the Mussey Twp. Cemetery in Capac MI.

Please reach out to Joellyn, Melissa, or Courtney at sharrondavis1942@ gmail.com for more information.

In lieu of flowers, she would have appreciated any donations being sent to the ASPCA in her name.