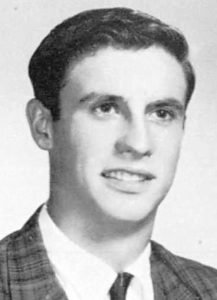 Leonard “Len” Mott, age 73, of Yale, MI died Thursday, July 14, 2022 at McLaren Port Huron in Port Huron, MI. Leonard Allen Mott was born May 8, 1949 in Brown City, MI. He was the son of the late Albert and the late Lillian (Kloc) Mott. Len grew up in Imlay City, MI. He was a graduate of Imlay City High School, Class of 1967. He was the MVP in 1967 of the Imlay City High School football team. Len lived in the Imlay City, Almont and Dryden areas through the years.

He proudly served in the United States Marine Corps as a sergeant during the Vietnam War from 1968-1971. While in the Marines, he earned the National Defense Service Medal, the Vietnam Service Medal, Vietnam Campaign Medal and Rifle Sharpshooter Badge.

Len enjoyed listening to AM radio, playing cards (especially rummy and euchre), horses, and driving down the back roads. He enjoyed helping his kids with their sheep, goat and horse 4-H projects.

The family will be available for visitation 11 a.m. – 1 p.m., Friday, July 29 at Muir Brothers Funeral Home.

Please be sure to sign the online register at www.muirbrothersfh.com to share condolences and memories with the Mott family.