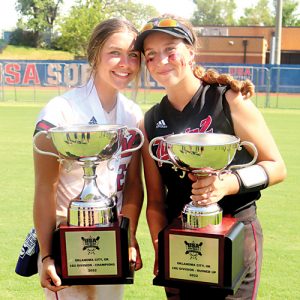 ALMONT — Almont’s Devin Johnston appeared on the roster of the champion Turnin 2 Pezz 16U National team and Grace Koenig was a part of the runnerup Turnin 2 Maloney National squad at the USA Junior Olympic Cup this past week.

Johnston finished the 10-game tournament with a five for 20 plate performance, including two doubles and a triple.

Her squad finished the tournament with a 10-0 showing.

Koenig provided Turnin 2 Maloney with an eight for 30 plate showing, including a double and a homer, during the tournament.

She also finished with nine runs and a pair of stolen bases.

Her team wrapped up the tournament with an 8-2 showing.

There were 24 teams entered the tournament.