On July 30, Imlay City police will fill vehicle with groceries 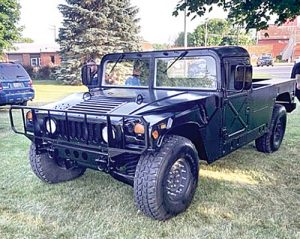 The 1990s vintage Humvee was obtained through a federal government program that loans used equipment to police departments.

IMLAY CITY — Imlay City Police Department has acquired a 1990-vintage Humvee at no cost to the city.

Police Chief Brett Selby said the department was recently able to obtain the vehicle through a federal government program that loans used equipment to police departments.

He added that the costs of painting, installing police decals and lights are being covered by a private (anonymous) donor.

“All the modifications; paint, decals and a used light bar are being completed through other private donations,” Selby said.

He said that the police department has already used the Humvee for many applications, to include an upcoming “Zero Hunger/Zero Waste” partnership with the Imlay City Kroger store.

“Our officers will be stuffing the Humvee with groceries for distribution to those less fortunate,” Selby said.