All that is gold does not glitter, not all those who wander are lost. The old that is strong does not wither, deep roots are not reached by the frost.
– J.R.R. Tolkien

The 6th generation of Bristol family farmers were picking up rocks from a newly planted copse of fruit trees in the center of Brookwood Fruit Farm. Their dad, Will, and granddad Charles had, over the past couple of years, worked up the land. They’d been removing old trees planted in the 1970s and replacing them with new ones.

The ground had been worked up about a half dozen times since then, Will says, so the kids’ were tasked with removing rocks and other obstacles that might cause problems with mowers, tractors and other farm equipment. And there it was. An old horseshoe that had been lost but not withered, and had survived decades of frost. Not glittering, but certainly a golden find for the farming family with deep roots in the land.

“We’re thinking that ground hadn’t been worked by a horse in at least 80 years,” Will says. “My great-grandfather, and my grandfather when he was a kid, all farmed with horses before there were tractors.” 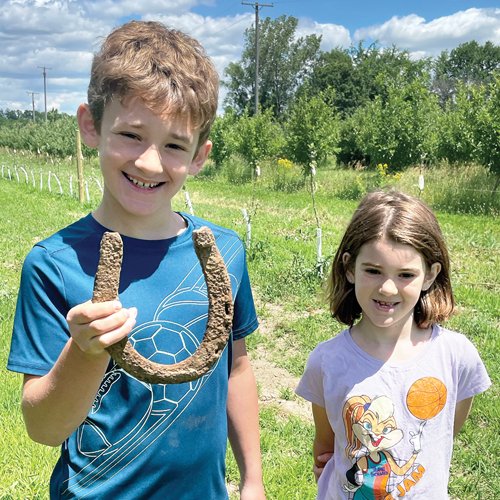 William Bristol, 9, and his sister Annabelle, 7, show off buried treasure that likely dates back some 80 years.

Will speculates that the formerly buried treasure in all probability dates back four generations—making it an amazing find.

“He always had Belgian horses,” Will notes.

For the Bristol family, it’s not surprising—but always delightful—to find such an historic artifact. The family farm dates back to 1826, when Will’s ancestor, Bezaleel Bristol III, was granted an 80 acre parcel of land in what later became Almont for his service in the American Revolution.

In 1910, Will’s great-great-grandfather William Howard Bristol purchased land to farm on his own. In 1912, great-grandfather W.K. Bristol took over the farm. There was a brook running through the farm, so in order to differentiate his farm from the other Bristol farms, W.K. dubbed the ‘Brookwood Farm.’

W.K.’s son—William James ‘Bill’ Bristol took over the farm in 1968. Twenty years later, Bill’s son (Will’s dad) Charles took the helm. Will, the youngest of four brothers, decided to stay in the family business. He he and Charles work the fruit farm today.

“I had the desire to be part of the farm, and am happy to keep up the family tradition,” he says.

Along with maintaining its family tradition, Brookwood Fruit Farm remains a thriving operation and a favorite stop for fresh tart cherries, peaches, pears and 50 varieties of apples.

The family ties have remained the same, however the landscape on the farm has changed over the years.

“Since we’ve purchased the property, we’ve built two apple storage buildings and built two houses,” Will says. “One that my grandfather lived in and where I now live, and another house.”

They’ve also added three homes for seasonal workers who work on the farm from September through November.

Will says the outlook for this year’s peach, pear and apple crops is just great.

“The weather was great when the apples and peaches were in blossom, so the harvest looks to be fantastic,” Will says.

Things weren’t quite as “peachy” for the tart cherry crop. The cherries were beautiful and delicious, Will says, but they weren’t as abundant as in past years.

“The pollination weather when the cherry blossoms were in bloom was too hot,” he says.

As for working in a field—literally and figuratively—that depends on the weather, Will says he’s learned to go with the flow, so to speak.

“Growing up on the farm, it’s nothing new to me, so I accept it,” he says. “Weather is a big contributing factor but it’s out of our control, and you just have to accept that and control the things you can, do what you can to minimize the damage, and let the rest go.”

Brookwood Fruit Farm is located at 7845 Bordman Rd. and will be open to the public when the peach harvest comes in. Visit www.brookwoodfruitfarm.com for detailed information about apple harvests, timing, and more. They may be reached at 810-798-8312.