IMLAY CITY — High-flying rides on the midway won’t be the only attraction filling the skies over the Eastern Michigan State Fairgrounds this year. Two shows, both making their inaugural appearance at the 2022 fair, will predominantly feature aerial feats by seasoned and talented performers.

Jetpack Flying Water Circus and The Great American High Dive Show will both offer three shows per day on the grounds, July 26-30. 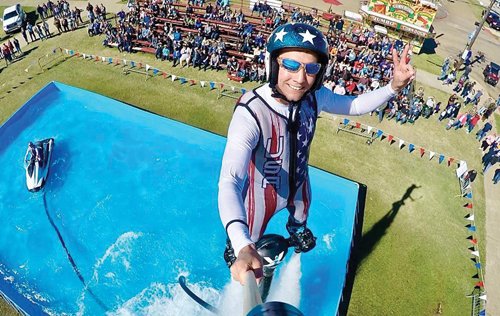 A jet pack attached to a jet ski will send Flying Water Circus members to heights of 40 or more feet over the Eastern Michigan State Fairgrounds later this month.

Inspired by the Tommy Barlett Show, a former popular attraction in Wisconsin Dells, performers use jet packs, attached to a jet ski, to thrust themselves 40 or more feet up in to the air where they display a range of tricks and stunts.

In the heat of a July afternoon, show attendees might not mind the occasional splash or spray of water that comes with an aerial water propulsion show. In some settings the water circus even designates a “soak zone” for those in the audience who really want to cool off.

The Jetpack Flying Water Circus is a production of the Nerveless Nocks Productions Company that traces its roots back to Switzerland in 1840 where it founded that country’s original circus.

“Since 1954, The Nerveless Nocks have been thrilling audiences across the United States, Canada, Mexico and world-wide,” the family-owned business states on their website.

The Jetpack Flying Water Circus has made many appearances at various state and county fairs across country in places like Florida, North Dakota, Idaho, Oklahoma, Illinois and Louisiana.

Both water and fire will combine for the Great American High Dive Show. Described as a “classic” diving show, fairgoers will see performers doing both springboard and tower diving, up to heights of 80 feet. In addition to thrills, the crowd will enjoy lighter, comedic moments too.

The Great American High Dive Show was created by Dana Kunze’s Watershow Productions. Kunze is an eight time world champion diver and seven time world record holder, making his highest dive from 172 feet – a record he still holds some 35 years later. Kunze began his professional high diving career at the age of 13 and has the distinction of diving off most of the bridges over the Mississippi River in the state of Minnesota.

Watershow Productions Inc. has put on shows already this year at the Texas Motor Speedway and the North Dakota State Fair. In past years, the company’s divers and other performers have made appearances at amusement parks, state fairs, on cruise lines and more.