New budget on the books in Imlay City

IMLAY CITY — Last month the board of education put their stamp of approval on a $24 million budget for the coming school year.

The 2022-23 budget assumes Imlay City’s student body will again decrease from the prior school year when fall enrollment is calculated. District leaders estimate that decline will amount to a loss of $246,210 in state funding but an increase in per pupil allocation from the state, for an extra $778,650 in revenues, will more than cover that loss, noted Amy Swantek, Director of Business Services, at the board’s June 27 meeting.

Swantek said they anticipate fall enrollment will stand around 1,794 students, down 26 from one year ago. 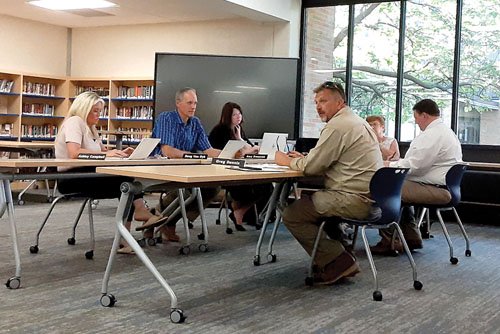 Board Vice President Greg Dennis, who also serves as chairperson of the buildings and grounds committee, gives an update on ongoing projects at the board’s June 27 meeting. The district has allocated $250,000 in their new budget for facility needs not covered by the 2019 bond.

The biggest cut in expenses—more than $368,000—will come from teaching position reductions and replacements. In total, six positions were eliminated—two at the elementary level, one at the middle school and three at the high school. The cuts won’t result in any layoffs.

“All of the positions that will be eliminated will be done through attrition. We had a number of retirements this year, and two employees who left the district to take positions closer to home. So, fortunately, no layoffs were required. The reductions are a result of some right-sizing due to changes in enrollment the last few years,” said Supt. Dr. Stu Cameron.

Similarly one of the budget’s expense increases will come from a two percent wage increase for employees and “step” cost increases for teachers and administrators, expected to total $324,916. The district’s expenses for health insurance and retirement costs are expected to rise by $88,000 and $101,000 respectively.

As for the presence of grant dollars in their budget, the district expects to see an additional $142,000 in federal funds, with the majority designated as COVID-19-related. For the year, federal COVID grants will total more than $1.16 million. They’ll see $210,000 less in state grant monies.

The new budget also calls for setting aside an additional $250,000 in facility repairs not covered by the 2019 bond project.

With $23.9 million in revenues and $24 million in expenses, the district plans to use $612,000 in fund balance dollars to cover the difference. Swantek estimates the fund balance, after the annual audit, will stand at $3.2 million at the end of fiscal year 2023.