TRI-CITY AREA — Almont’s Brandon Hunsaker along with Capac’s Gavin Ruegsegger and Jared Fahley suited up for the West squad in a 12-7 loss to the East team at the Blue Water Area Senior Baseball All-Star Game on Tuesday, June 28. 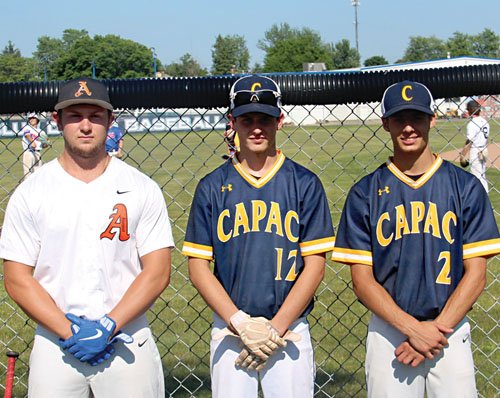 Richmond High School is where the matchup was contested.

In Tuesday’s encounter, the West squad jumped out to a 2-0 advantage after one inning was over with.

That was followed by a scoreless second inning of play.

Inning number three saw the East team collect two runs and the West none, squaring the scoreboard count at 2-2.

The next three innings would see the East amass eight total runs and allow none. That staked them to a 10-2 cushion at the time.

The West squad then put together a 5-2 rally over the final three innings, only to drop a 12-7 verdict.

Hunsaker put up the best offensive output among the Tri-City Area contingent on hand. He managed a walk and a flied out in his two plate appearances.

In addition to that, Hunsaker listed third base and pitcher as his defensive assignments.

Ruegsegger flied out once and reached base via a fielder’s choice.

On defense, he took turns at second base and rightfield.

He listed third base and catcher as his defensive assignments.