TRI-CITY AREA — Work that’s meaningful and desirable—that’s what Sam Lovell was eager to experience as a participant in the Four County Community Foundation’s Return to Earn internship program. By all accounts, the Romeo native has experienced that so far in his placement at the Lapeer County Clerk’s office.

Sam, a current student at Georgetown University in Washington, D.C., has spent this summer engaged in a wide range of tasks with Clerk Theresa Spencer and her staff. He’s collected 3,000 juror questionnaires, helped proof ballots for the upcoming August primary election and worked with the Board of Canvassers to approve ballot containers. The college student even had the chance to serve as bailiff in the 40th Circuit Court – a special honor made possible by Spencer and Chief Judge Nick O. Holowka.

“Working for Lapeer County has been incredible, and I love it here,” Sam said.

Along the way, Sam said he was surprised to learn how broad the responsibilities are of the clerk’s office. 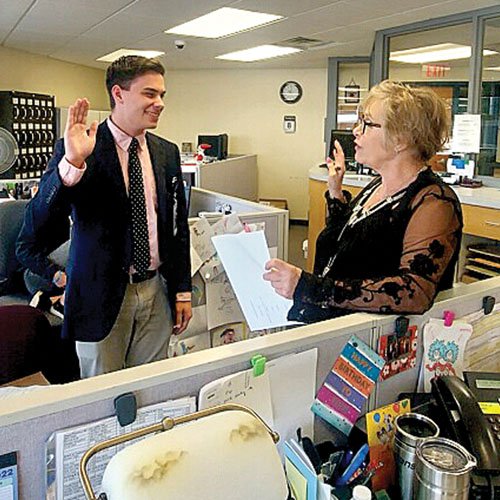 At the start of his summer internship in the Lapeer County Clerk’s office Sam Lovell took an oath administered by Clerk Theresa Spencer.

Spencer concurs that Sam’s time in her office has been meaningful for all involved.

“He has been so helpful on any projects I have requested and is keenly interested in all aspects of the office operations – which are many – especially as we head into the August election season,” she said.

“During his time he has attended County Commission meetings, regular Circuit Court docket proceedings, and has even served as Bailiff in two separate Circuit Court jury trials at the request of the Chief Judge. Sam comes to the office every day in professional work attire and is very professional in his conduct. All of my staff appreciate working with him! I think it is a win-win.”

His time at the clerk’s office melds well with his plans to double major at Georgetown in government and economics and eventually attend law school. Sam said he’s grateful for the chance to participate in the Return to Earn program and not be forced to choose between building his resume or getting a paycheck.

“Prior to participating in the Return to Earn program, I worked with the Four County Community Foundation as a high school student and became deeply familiar with the foundation’s incredible work. Unfortunately, too often students face a difficult choice: to either accept a low-paid—or even unpaid—work experience related to their studies, or to pursue less desirable employment for better wages and hours. The Return to Earn program ensured I didn’t have to make this choice,” he said.

The foundation launched the Return to Earn internship program earlier this year and currently has 10 college students who’ve recently graduated from local high schools participating in paid summer internships with local businesses and municipalities. The foundation and participating hosts share the cost of the student’s pay.

The goal of the new program is to help students gain valuable work experience and make potential career connections close to home.