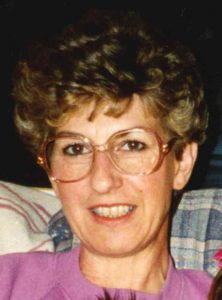 Edna “Carol” Jackson, age 77, of Brown City, MI died Thursday, June 30, 2022 at United Hospice Residence of Marlette, MI. Edna Bertha Wallershine was born November 12, 1944 in Detroit, MI. She was the daughter of the late Geraldine Wallershine. She grew up in Almont, MI with the Earl and Jennie Crowel family and was a graduate of Almont High School, Class of 1963.

Carol married Roger Owen Jackson on April 10, 1965 in Imlay City, MI. Carol had worked for over 25 years in the Imlay City and Lapeer areas as a housekeeper, cleaning homes. Carol and Roger were members of the Imlay City Eagles Club.

Carol is survived by her husband, Roger Jackson; her sons, Scott Jackson of Imlay City, MI and Todd Jackson of Brooklyn, NY; and by a brother-in-law, Les Jackson. Also surviving are her grandchildren, Corrine Bostick, Morgan Jackson and Chad Jackson; and great-grandchildren, Alec, Jesslyn, Everly and Elden.

The family will be available for visiting hours from 4-8 p.m. Wednesday, July 6 and from 10-11 a.m. Thursday, July 7 at Muir Brothers Funeral Home of Imlay City.

Those wishing to make memorial contributions may direct them to the American Society for the Prevention of Cruelty to Animals (ASPCA) or the Lapeer County Humane Society.

Please be sure to sign the online register book at www.muirbrothersfh.com to share your memories and condolences with the Jackson family.