CAPAC — A continuation bond, worth $6.7 million for 15 years, will go before voters in the Capac Community School District who cast a ballot in the primary election on August 2.

Supt. Jeff Terpenning said the no mill increase request is possible thanks to the district taking advantage of low interest rates last year.

“We did bond funding—essentially we refinanced our ‘house’—and that saved us a bunch of money and that allowed us to say this year that we won’t seek a mill increase for 15 years,” Terpenning said.

For the average taxpayer that means they won’t have to pay any more for the district levy than they are paying now unless their property values rise significantly.

If approved, the district will use the six million plus dollars to make a range of facility repairs, improvements and additions – from something as basic as replacing classroom doors to constructing a barn for ag science programming.

“The classroom doors in both the elementary and high schools are the same ones that were installed when the buildings were built,” he said of the decades-old structures.

“They’ve served us well but nothing lasts forever.”

Other classroom essentials that would get replaced with bond dollars include cabinets, sinks, window treatments, furniture and clocks at the elementary school.

At the high school, new hallway lockers and cafeteria seating would be purchased; more storage for the music programs would be created and both gym floors would be completely replaced. The playing surfaces too are original to when they were first installed.

Site work around the district grounds would include landscaping renovation, paving the elementary school’s staff parking lot and various projects within the stadium grounds including new grass and landscaping, a new stadium entrance and benches and upgrading the current irrigation system on the football field.

New buses and upgraded power equipment for maintenance purposes, like lawn mowers and tractors, are also on the project list.

“Our fleet of buses is very new but we want to keep adding to the fleet because when buses get old, they get expensive,” he said. 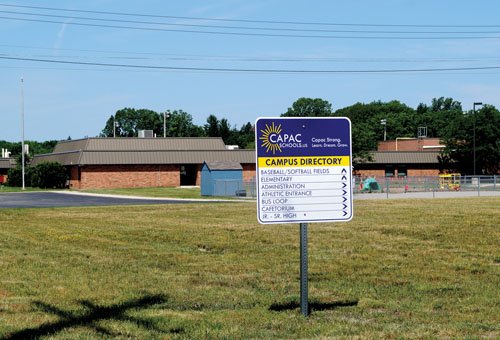 Features original to both school buildings would also see upgrades including classroom doors and both gym floors at the high school.

In addition to a new barn, district leaders would like to create an outdoor learning center at the elementary school which would be used to tie in with existing agriculture science programming at the higher grade levels and offer hands-on learning experiences, Terpenning said.

“We think agriculture is very important and we want to expand our programming,” he added.

A new barn for the ag science and FFA programs would allow for the district’s growing cadre of livestock to be housed under one roof. Currently, the school’s small animals—pigs, chickens, rabbits and ducks—have a home in a small shed near the high school while their newest addition, two lambs, are housed in a pen near the bus garage. Terpenning said they are looking to put up the new structure to the west of the existing school buildings.

“We’re very excited and hopeful that voters recognize we are frugal with their money and agree that the bond projects we’ve highlighted are needs, not wants,” Terpenning said.

When voters passed a bond measure in 2017, district leaders compiled four pages’ worth of needed projects and anticipated being able to only complete a quarter of them with the $6 million in bond funds. In the end, nearly all of the work was accomplished.

“There were very few things we didn’t get done because of the way we handled the money,” Terpenning said.

“Our board members are very frugal with other peoples’ money.” In addition to 2017, voters within the last decade also approved a bond renewal in 2013.

Getting the word out

Terpenning said that a bond information campaign is underway and that includes handing out trifolds, posting information online and having a presence at an upcoming youth sports tournament. For more information about the bond, visit capacschools.us or contact Supt. Jeff Terpenning at 810-395-4321.