LAPEER COUNTY — The majority of Michigan counties—46 of 83—have some type of law enforcement millages on their tax rolls and local leaders believe Lapeer County should be added to that number.

In August, voters will weigh in on a proposed 1.45, six year law enforcement millage being proposed by the Sheriff’s and Prosecutor’s offices. The majority of the $4.7 million per year levy would go to the sheriff’s office and the remaining $600,000 would be directed to the prosecutor’s budget.

He, Sheriff Scott McKenna and Prosecutor John Miller are the circuit of elected leaders who’ve been visiting local municipal meetings to detail the proposal to fellow elected leaders. In the coming weeks, the trio also plans to host town hall meetings to make their case to the general public too.

If approved, millage dollars will be directed towards seven specific areas—school safety, court security, additional road patrol deputies, general hiring and retention in both departments, training, funding of support services and the creation of a new unit within the detective bureau for cyber crimes.

If approved, a chunk of millage dollars would go directly to each of Lapeer County’s school districts. Every year, each district would receive $120,000 that can be used to fund a current or add a new school resource officer position or to purchase equipment to “harden” their facilities.

Howe stresses that the funds will be used at the district’s discretion.

Howe and others describe the Lapeer County Complex in downtown Lapeer, which is home to the courts and many other county departments, as one of the most “vulnerable locations” in the county due to the volume of people in the building and the lack of any kind of on site security.

“There are a lot of important services and business conducted there,” Howe said.

Earlier this year, deputies conducted an “audit” at the complex and in their interactions with visitors discovered more than 100 cans of pepper spray, dozens of edged weapons and five guns. All of those items are forbidden within the building—something that’s prominently posted on the complex doors—but Howe said that visitors have opted to ignore those warnings due to a lack of enforcement. 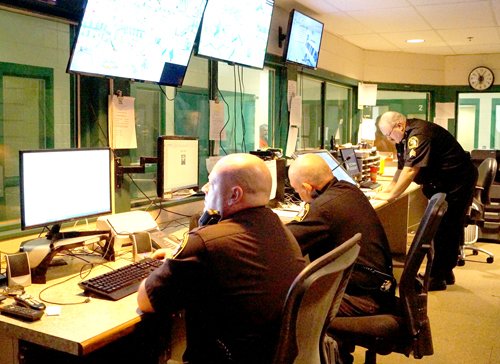 Howe and McKenna would also use millage dollars to double the number of night shift road patrol deputies—going from two currently to four.

Both the sheriff and prosecutor’s office say they are in desperate need of being able to pay their employees more money.

Miller notes that new prosecutor’s typically come out of law school with $150,000 in student loans but he can only offer a starting wage of $50,000, lower than in many neighboring counties.

Likewise, Howe said there are many dedicated officers who would like to work for the sheriff’s office but they can’t take a pay cut to become Lapeer County employees. Deputies are paid 10-20 percent less than other police officers in Lapeer County.

The sheriff’s office currently is not able to set any money aside for specialized training. What funds they do receive from the state go directly to a consortium and those programs are designed for entry-level employees.

The agency boasts a sizeable list of specialized teams and units—Dive Team, Marine Unit, Search and Rescue, Special Response Team, Victim Services Unit, Motor Unit, Accident Reconstruction and Medical Examiner Investigation—that are available to every agency in the county. Most are not funded through the county budget and rely on hosting fundraisers and volunteer staff. Those deputies and members of the public who give of their time also pay for their own supplies, training and gas money out of their own pockets.

“I don’t want it to cost them money for their time,” Howe said.

Millage dollars could be used to reimburse those individuals and provide them with the supplies and gear they need.

Due to the volume of cases, law enforcement leaders believe it makes sense to create a new unit within the sheriff’s office detective bureau to deal solely with frauds and scams directed at senior citizens and target individuals wishing to exploit children, often through online means.

“We would be looking at staffing this with three to four people and their services would be available to all police departments in Lapeer County,” Howe said.

Officials have said they believe they can eventually lower the millage rate once some of their new initiatives are up and running, thus the reason the ballot language indicates “up to 1.45 mills.”

In millage materials and presentations, county law enforcement officials are addressing likely concerns from tax payers about the need and timing of this proposal.

They acknowledge the impact that inflation is taking on the economy and household budgets, but point out that crime rates increase during times of economic instability. Howe said that sheriff deputies handle about 20,000 incidents per year or about half of all calls into Central Dispatch.

Proponents of the millage also recognize that many Lapeer County residents already pay for police services, either through their property taxes or an extra millage or special assessment.

“An arrest is just the tip of the iceberg,” Howe said, noting that their department is tasked with lodging, caring and transporting arrestees and the prosecutor’s office then handles the criminal case in the courts.

Likewise, some the millage’s other projects like courthouse security and adding road patrol deputies will have a direct benefit to Lapeer County’s police departments, he believes.

As for those who question if the county should have been better prepared for this situation, Howe said that Lapeer County residents have enjoyed low tax rates but are simply no longer sustainable for the county’s law enforcement needs.

“We’re at the point that if we didn’t say or ask for anything, it would be considered a neglect of duty,” Howe said.

More information about the millage proposal can be found on the ‘Friends of Lapeer County Law Enforcement’ Facebook page.