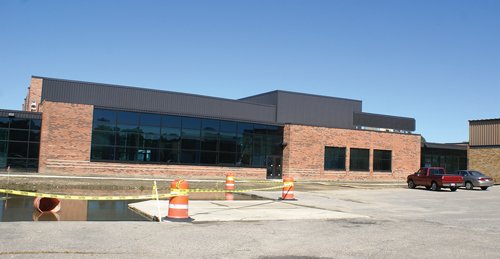 The construction of Capac Schools’ cafetorium in 2015 connected the district’s two school buildings. A safety grant will help Capac purchase and install a new district-wide public address system that can reach all points within the buildings during emergencies, drills and more.

Capac Community Schools was one of 150 recipients of a Competitive School Safety Grant Program through the State of Michigan which allocates funding toward the purchase of equipment and/or technology to improve safety and security. This year, the program awarded $10 million to schools—both public and private.

Supt. Jeff Terpenning said that since the construction of the district’s cafetorium which now connects the elementary and Jr.-Sr. high schools, the district is effectively contained in one school building.

“Should we want to announce something to the whole district, it can’t currently be done other than each schools doing their own separate announcement,” Terpenning said.

Although the schools are technically under one roof, the distance between points is still significant. In the case a threatening situation were to occur in the administration offices—located in the northeast corner of the high school—a district-wide lockdown could be issued with the new public address system that would extend to classrooms in the far southwest corner of the elementary school.

“We’ll be able to, with the click of a button, make those kind of announcements, but also still have the ability to use it separately within the two schools,” Terpenning said.

Due to a number of factors, including the availability of system components, it’s not known when the new public address system will be installed, he noted.

“These grant awards will provide the resources needed by many schools throughout our state to ensure students have a safe learning environment,” said MSP Director Col. Joe Gasper.

“The review committee gave priority to proposals that sought to secure exterior access points at school buildings, as it is considered one of the best and most cost-effective ways to improve safety and security.”