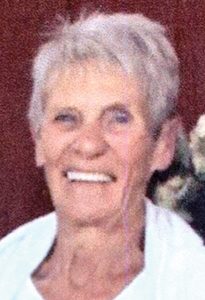 Beverly “Bev” Stroman, age 83, of Imlay City (recently of Lapeer), MI passed away on Tuesday, June 7, 2022 at McLaren Lapeer Region Hospital. Beverly Ruth Vlieg was born November 14, 1938 in Imlay City, MI. The daughter of the late Ralph and Marie (Brandt) Vlieg, Beverly grew up and lived most of her life in Imlay City, MI. She graduated from Imlay City High School in 1956 and attended St. Clair County Community college where she earned her Licensed Practical Nurse (LPN) certificate. After graduation she worked as an LPN at Lapeer County General Hospital, Knollwood Clinic with Dr. Barrow, and eventually she went on to own and manage Harrison Adult Foster Care home in Imlay City, MI for almost 20 years.

On July 4, 1958 Beverly married Gerald Stroman in Imlay City and together they went on to live a life full of hard work, but certainly not devoid of fun. Together they raised two children, Julie and Jeff, and enjoyed time spent together working on the yard, taking drives together, and visiting their cabin up north. Following retirement they spent many years traveling in their fifth-wheel, seeing the country outside of Imlay and finding warmer weather locations during the winter months.

Her penchant for yard work was evident in her love for her lawnmower and well-manicured lawns. She was a devoted member of the Imlay City Christian Reformed Church, where she spent years passionately caring for the flowers and shrubbery. She was beloved by her friends and could usually be found gadding around with the neighbors, playing euchre, and eating chocolate chips for dinner. She valued Christian education and encouraged her children and grandchildren to pursue knowledge, as it is something that can never be taken away from you. Her strong-willed spirit, kindness towards others, and love for her family will never be forgotten and certainly missed.

A private family graveside service at Imlay Township Cemetery is planned for the end of June.

Please be sure to sign the online register at muirbrothersfh.com to share condolences and memories with the Stroman family.