ALMONT — School’s out for summer, which affords Almont students and teachers a chance to enjoy some time away from their classrooms.

Meanwhile, the district is using the summer hiatus to make some needed upgrades.

Schools Supt. Dr. William Kalmar said the improvements will include painting the gymnasiums at Almont High School and Orchard Primary. 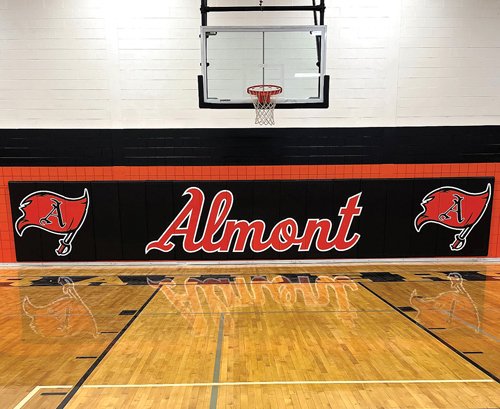 Repainting of the high school and Orchard Primary gyms is one of several projects happening this summer in Almont.

“Probably the most noticeable upgrades people will see is the repainting of the AHS and Orchard Primary gyms,” said Kalmar. “This is the final step in a three-part improvement plan for the gyms.”

Kalmar noted that Orchard Primary gym has had issues with “effervescence stains” to be painted later this summer.

“Additionally, we are building an outdoor pavilion in the primary school’s orchard to create a more permanent and usable outdoor space for learning,” he said. “That will be a neat addition.”

He added that the district had last upgraded the floors in 2016, while the bleachers were repaired and handrails installed in 2019.

“Our new maintenance director, Jason Fredrick, has a comprehensive list of summer projects to be paid for with money from our general fund and (voter-approved) sinking fund,” Kalmar said.

Kalmar said the Board of Education had some decisions to make regarding programming during a work session earlier this month.

“We are budgeting conservatively and believe we will remain stable in 2022-2023,” Kalmar said. “As always, the challenge is that our budget is due before the state is required to approve school (per-pupil) funding; so we are making calculated guesses.”

Kalmar said the district has settled all of its labor contracts, with the exception of teachers.

He pointed out that it is not unusual for the Almont Education Association (AEA union) to be the last to reach an accord.

“They have the most members and the most complex contract,” said Kalmar. “Those negotiations were scheduled to begin on June 21.

“The Board is committed to keeping a healthy fund balance,” he added, “which means we can never do everything we want as soon as we want.

“Regardless, the financial condition of the Almont School District is worlds apart from where we were five or six years ago.”