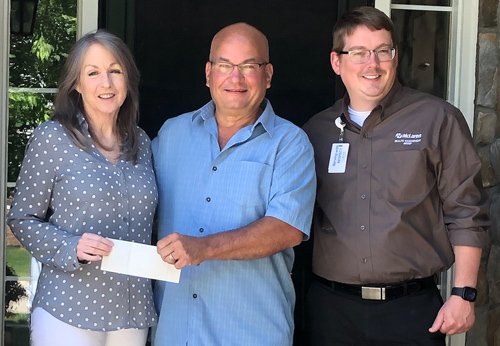 TRI-CITY AREA — It’s said that paths that cross will cross again, and that life can change in an instant. For former resident Dave Streber, that sudden change transformed into a lifetime of giving and gratitude for the staff of and services offered by McLaren Hospice.

When Dave Streber and Marti Seaman’s paths first cross, it’s a sorrowful time. A McLaren Hospice nurse, Marti gets to know Dave while caring for his grandfather, Edward Pytlak, who spent his last weeks at the Streber family home in Almont. Edward was the beloved father of Nancy Streber, Dave’s equally beloved mom.

Neither of them know that their paths will intersect yet again, and will continue to cross for the next 25 years.

It’s the morning of Mother’s Day, 1995, when a massive heart attack claims Nancy’s life at age 55. The sudden loss is devastating. Through their grief, Nancy’s family is determined to find a way to honor her life. Dave remembers her fondness of and gratitude for the hospice services provided for her father, and in 1997 the family creates the Nancy Streber Memorial Golf Classic to honor and celebrate Nancy’s life. They choose to hold the annual event on Mother’s Day. To date, the outing has raised more than $150,000 for McLaren Hospice and the services it provides.

Dave recalls how touched and amazed he and his mom were by the hospice workers who selflessly attended to his grandfather’s needs, and helped make his last days comfortable some 30 years ago. Nurse Marti Seaman was among them.

“Ironically enough, and this seems to be a key, Marti was in that dining room where my grandfather’s bed was set up,” Dave says. “Nobody could have planned or predicted that our lives would still be connected, that we would donate to McLaren Hospice because of her and the others who spend their career helping others when they need it most.”

It takes a village

“Honoring him in this year’s outing was again a way for me to mourn and grieve, and to honor his life,” Dave says.

A special hole was dedicated to Paco. There, golfers were treated to Paco’s favorite songs, and to a Bud Light, his favorite beer. Participants dipped into their pockets and donated additional funds, all in Paco’s honor.

“Bob and his wife Beth came to the outing every year, he was on the number one team and it was important to me to do something to celebrate his life,” Dave says.

As always, golfers gave generously of both their time and money, Dave says, and their participation is remarkable.
“They are absolutely the most outstanding people,” he says. “About 80 percent of the people return every year and it doesn’t matter what the weather is.”

Job commitments, family matters, and of course COVID changed things a bit over the years, but even the pandemic didn’t stop people from donating to the cause.

“Even during the shutdown when we could not play, people mailed their checks and in that particular year—2020—we still raised $7,600 and we didn’t even hold the event.”

Twenty-five years of gratitude and giving translates into 25 years of end-of-life care services and programs that thousands of people around the area need. For nurse Marti Seaman, who is now a Regional Hospice Manager for McLaren, it’s a priceless gift.

“For 25 years Dave and his lovely wife Tami have raised well over $150,000 which goes to providing care for individuals who are indigent or who don’t have insurance,” she says. “It affords us the opportunity to give patients and their families the care and support that they need.”

Marti says she’s seen firsthand how much the Strebers’ contributions make a difference in the community, reiterating that it does, indeed, take a village.

“I think it’s an honor to be at someone’s bedside in their last days, and I always tell the golfers at the outing that when we go into the patients’ homes, they’re walking with us on that journey,” Marti says. “They’ve been providing the funds to make our care possible, and they take that journey with us.”

The fact that she and Dave have been connected for the past 30 years is yet another priceless gift, Marti says.

“When Nancy died and Dave said that he wanted to honor his mother, we were excited to be part of that,” she says. “The fact that he has continued for the past 25 years demonstrates a level of dedication and commitment you don’t often see. I’ve been blessed with having met his family, and to be part of something bigger than myself. He has definitely made a huge impact.”

This year’s winners with a score of 60 are Don Berquist, Kevin Crock, Jeff Yancey and Jim Berquist.

Those with a score of 61 are Pat Desjardins, Mike Wetzel, Greg Featherston and Andres McDougal.

The Streber family gave special thanks to Gold Sponsors Tom Sustarich family, Del Akers and Dean Wolf family and to those who supported them in various ways including Heather Hills Golf Course, Melissa and Liam Hamilton, Evalina Correa, Chuck Mack and Jenny Streber.