CAPAC — Work has begun on the village’s water tower. 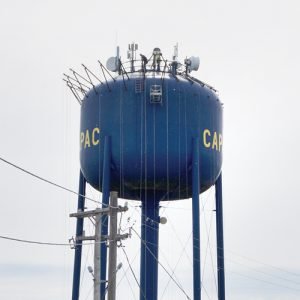 Contractors could be seen working on the exterior of the Capac water tower last week. The tower has since been drained of water so that interior work can also be completed.

Last week, employees from E&L Contractors of Howell could be seen working on the 250,000 gallon tower’s exterior. On Monday, Manager Travis Youatt said that the tower had been drained and that work on the interior was also underway.

He told council members at their regular meeting that night that the approximately 30 days the tower is empty puts additional pressure on the village’s wells and the Mussey Township Fire Department.

“The fire department has put alternative measures in place to put fires out,” Youatt said.

“We’ll be happy once we’re able to fill the tower back up.”

Youatt told council members that they continued to have discussions with Air Advantage about removing all of their antennas from the top of the tower. As of Monday, one of the company’s antennas still remained even though the village terminated their agreement with the company and stipulated all equipment be removed before the repair and painting work began.

The council awarded the $329,000 project to E&L Contractors in March. The work will include eventually covering the tower and sandblasting it before it’s repainted. Members have opted to have the tower painted white with “Capac” and a spear from the school district’s logo, to be added in blue.