Beard & mustache contests for all at fairgrounds plus fireworks, Dueling Pianos

IMLAY CITY — You may have noticed some extra hair growing from the faces of local menfolk.

You are not alone.

On Saturday, June 25, the Eastern Michigan State Fairgrounds will be home to hundreds of bearded and mustachioed individuals anxious to display their hairy selves.

The occasion will be the 2nd Annual Sasquatch UnCut Beard and Mustache Competition; an event that will tickle the chins and cheeks of contestants and observers alike.
Coordinating the event is the ever-enthusiastic Mark Byrnes, who knows of what he grows.

A perpetual beard and mustache-growing contestant, Byrnes has won his share of contests over the years.

He’s looking for a great turnout at this year’s event at the fairgrounds in Imlay City.

“Men, women and kids are invited to compete in a variety of categories, including our ‘Yeti’ competition, which is new this year,” Byrnes said.

For more information about the contest, visit sasquatchuncut.com. 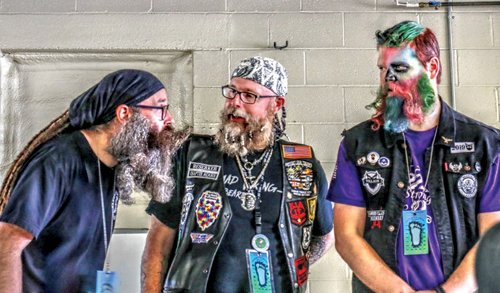 Competitors chat during judging at last year’s Sasquatch UnCut event in downtown Imlay City. This year the event moves to the Eastern Michigan State Fairgrounds which will also host a free fireworks show as part of the Imlay City Freedom Festival.

While attendees should have nothing to fear, Byrnes advises visitors to be on-the-lookout for the fast-moving and highly elusive “Sasquatch,” whose footprints were visible at last year’s event.

Through his long association with beard-growing organizations, Byrnes and his hairy mates have raised thousands of dollars for good causes.

That will continue this year, with donations and proceeds from the 2022 event being donated to various good causes and charities in Michigan.

For those unfamiliar with local history, Imlay City hosted a beard-growing competition in 1970, when the city celebrated its 100th anniversary with a “Brothers of the Brush” challenge.

The fun doesn’t end after the beard and mustache contest trophies have been handed out on Saturday.

At the conclusion of Sasquatch UnCut, the Imlay City Freedom Festival will begin with a grand fireworks show beginning at 10 p.m. sponsored by three local businesses—Creekside Cleaning, Mette Financial and Halabicky Insurance.

Doug Halabicky, owner of Halabicky Insurance, said the businesses have wanted to see an Independence Day celebration happen in Imlay City but with all the fireworks companies booked years in advance for the holiday, they had to find an alternate date.

“We really wanted Imlay City to have professional display and we are all very excited to work with the Eastern Michigan State Fairgrounds as well,” he said.

“It should be a very patriotic night to show our love for America and all of the Imlay City area. The show should be able to be seen for at least half a mile in all directions at least.”

Those who wish to watch the fireworks show up close are welcome to find the ideal spot at the fairgrounds whether that be from the the grandstands or even their vehicles. There is no cost to attend.

After the fireworks, the fairgrounds will host a Dueling Pianos event in the FFA barn. There is a $10 cover charge and is open only to those 21 years of age and older. Guests can enjoy an adult beverage and the antics of talented performers.