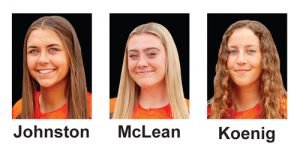 ALMONT — The Almont softball team was well represented on the Division 3 All-State lineup which was announced recently.

Devin Johnston, a junior, was an All-State first team pick as a third baseman.

In addition to her state recognition, Johnston closed out her second varsity season as an All-Blue Water Area Conference, All-District and All-Region pick.

McLean also amassed eight singles and four doubles in 38 at bats, good for a .316 batting clip.

She also contributed 12 RBI and two runs scored to Almont’s cause.

This was her first year on Almont’s squad.

Koenig also contributed 46 runs and 34 RBI to Almont’s cause.

In addition to her statewide accolades, Koenig wrapped up her second season on Almont’s squad as an All-Blue Water Area Conference, All-District and All-Region choice.