Once stately structure razed due to blight & public safety 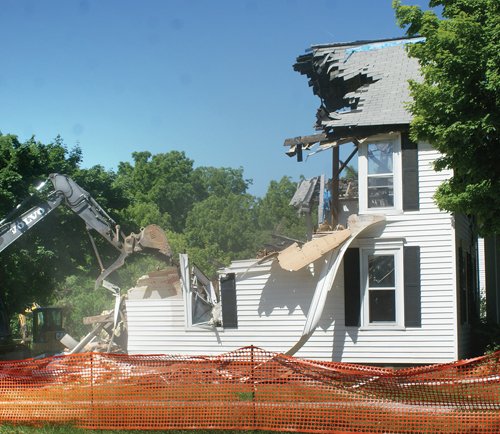 Workers from KT Demolition of Brighton make quick work of the demolition process, which will take about two days.

IMLAY CITY — The 19th-century fire-damaged home at the corner of Fourth and Handley streets has met its fate with the wrecking ball.

Yesterday, June 21, a crew from KT Demolition of Brighton was on site at 315 Fourth Street to begin the two-day demolition process.

Upon their arrival, Imlay City Police Chief Brett Selby asked motorists to try to avoid the immediate area while the demolition is under way.

“We need to keep the flow of traffic moving,” said Selby. “Anyone wanting to observe the demolition should do so from the opposite side of the street to keep everyone safe.”

Built in 1880, on June 3, 2020, the historic structure sustained heavy smoke, fire and water damage in a fire that started in the attic.

At time of the fire, the house was occupied by Danielle Clark, Rick Makurat and their children, who had lived in the house for only about six months.

Ironically, Danielle and the children were inside the house eating when the fire broke out in the attic.

It was not until neighbors began knocking on the doors and windows that the startled occupants were made aware of the attic fire.

After the fire, Imlay City officials sought demolition of the house for reasons of blight and public safety.

The demolition was stalled because the homeowners’ insurance company delayed the process.

It was not until recently that the former owners and their insurance company reached a settlement.