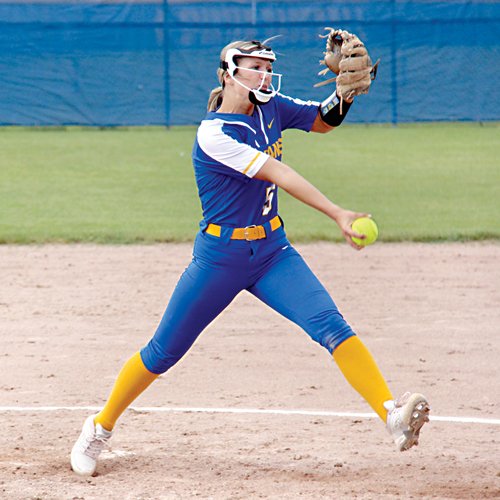 Imlay City’s Jaya Forti delivers a pitch to home plate in a game earlier this season.

IMLAY CITY — The Imlay City softball team was denied in their pursuit of a Division 2 regional championship appearance, dropping a 7-1 outcome to host Detroit Country Day in a semifinal encounter last Saturday.

“I am very proud of each and every one of the girls on the team this year,” Imlay City Coach Jean Bannister said. “They battled all season long,” she noted.

“The players never gave up and proved to themselves and the community they were winners. This team grew and learned so much this season.”

In Saturday’s encounter, Imlay City and Detroit Country Day (listed among the honorable mention Division 2 squads statewide) generated one run each during the opening inning of play.

The next two innings would prove scoreless.

Inning number four would see Detroit Country Day collect four runs and Imlay City manage none. That staked them to a 5-1 lead at the time.

The fifth inning would prove scoreless.

Detroit Country Day then struck with a 2-0 sixth inning advantage, increasing their cushion to 7-1.

That would prove the eventual final as inning number seven was scoreless.

Chloe Bruman led Imlay City’s offensive attack with a pair of singles. She was backed by Hope Schriber (a double) and Brook Ross (a single).

Natalie Stone (hit by pitch) and Olivia Livingston (a walk) were the other Imlay City players who reached the basepaths.