Commission decides commercial arrays not in harmony with existing land use

GOODLAND TWP. — Saying that a 1,600-acre plus solar facility would not be in harmony with existing land use, the township’s planning commission denied a special land use request from Orion Renewable Energy at a special meeting on Saturday, June 11.

After several hours posing questions to Orion representatives and calculating the proposed project’s acreage, the commission voted 5 to 1 to deny the California company’s request, effectively shuttering their plans for a commercial-scale solar array in the southeast portion of the township.

Voting in favor of the motion to deny the special land use request were Mike Bissett, Lynne Foltz, Matt Van Dyk, Steve Groat and Roger Roszczewski. John Moenaert voted against the motion and Dan Steckly recused himself from the matter.

“Farmers were offered an opportunity and I give credit to them for pursuing that opportunity but we had to follow the rules,” Van Dyk said, referring to the township’s provisions for special land use approval. 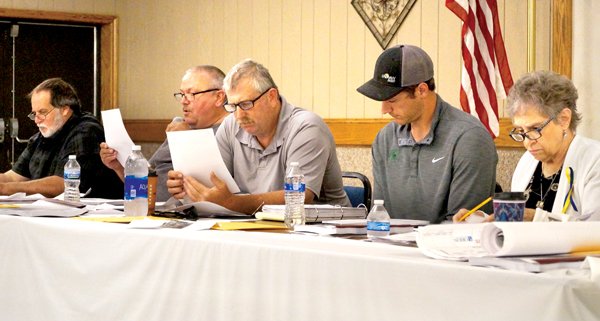 Those four provisions address the location, size and character of a project; the potential for creating hazardous traffic conditions; the site layout and intensity of use and the ability to comply with all regulations within the zoning district.

Although some members had differing opinions about each topic, they were nearly united in their belief that the size and location of the 1,639 acre project was not in harmony with Goodland Township’s mostly agriculture setting.

“I don’t think it belongs in that location, it’s just too big,” Foltz said.

Bissett said that despite vegetative barriers, he felt the solar panels would still be very noticeable.

“It would take away from the quaint rural area we live in,” he said.

The township’s solar ordinance doesn’t limit the size of a commercial solar array. Foltz said that when officials crafted the document they felt each project should be evaluated on its own merit.

Orion was seeking to construct a series of solar arrays with a 100 megawatt capacity that would connect to nearby transmission lines and onto the electrical grid. Company officials estimated they would invest $100 million in the development if approved.

Per the township’s zoning ordinance, an applicant can challenge any final decision of the planning commission by making an appeal to the Goodland Zoning Board of Appeals.

As of Tuesday, June 14, Supervisor Ron Cischke said neither the township or their attorney had received any indication from the company if they would pursue that option.

Following the vote, a majority of those who addressed the commission praised them for their decision.

“Thank you for saving our community and our farmland,” said resident Sharon Sklar.

“Farms are going to put more back into the local economy than solar would have ever done,” added resident Mark Farley.

“You have restored my faith in this government,” he said.

John Gilliland, a property owner who signed an agreement with Orion, also thanked the commission for their time but said he felt some involved in the process leaned on emotions instead of facts.

A much smaller crowd was in attendance Saturday as compared to the May 14 public hearing, also held at the Knights of Columbus Hall.

Several board members told the assembled crowd that the process had been very challenging.

Bissett said it was painful to wrestle with both options and ultimately vote against the proposal knowing the struggle farmers experience to make a living from their land.

Moenaert said he was thankful township officials had the foresight to put a solar ordinance on the books before this proposal came their way.

Van Dyk said it was nice to see residents passionate about the future of the township, adding that proponents and opponents both made good arguments, but encouraged those involved to be united once again.

“It’s important that we can come together after all of this. Hopefully there’s a lot of good that come out of this,” he said.