IMLAY CITY — One hundred years of living is a milestone reached by a precious few.

Among them is Imlay City resident Caroline Hofmeyer, who on Sunday, June 5, celebrated her 100th birthday at New Hope Church surrounded by her remaining family and friends.

The daughter of Ed and Gertrude Bloemsma, she spent her early years living on a farm near Holland in Ottawa County.

It was in 1929 that the family moved to the Imlay City area, having lost the family farm during the Great Depression. 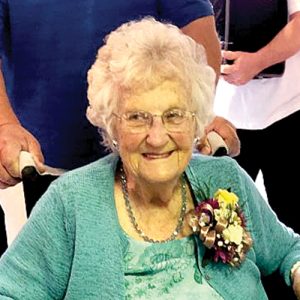 Caroline is all smiles as she arrives for her birthday bash.

Though just seven years old at the time, Caroline recalls some of the challenges of relocating to the new and unfamiliar surroundings.

“We moved here in a Model-T Ford, with four of us sitting in the back seat,” Caroline said. “We came here because my parents knew other families that had moved here.

“We were very poor at the time and we all worked hard in the fields, picking celery, carrots and potatoes for the Brandt family,” she said. “At night, we’d get a chance to play ball with some of the other kids that also worked on farms.”

Back then, other than weekly visits to Imlay City to buy or barter for groceries, Caroline said the family rarely frequented the city.

“We would go to Schermer’s for groceries because they would give us groceries for free until we had the money to pay for it,” she recalled. “There was a lot of trust back then.

“Sometimes when we were in town, my parents would give us a nickel for ice cream at the Tietz Dairy,” she said. “We really looked forward to that.

“There was the theater downtown, but I don’t ever remember seeing a movie there.”

Caroline does remember some of the teachers she had when she attended Blacks Corners Country School.

“Hazel Limicker was my fourth-grade teacher, and I also had Helen Wallace for a teacher. They were both real good teachers and I learned a lot from them.”

Although she never graduated from high school, Caroline feels she has learned plenty about life during the past 10 decades.

“Everything has changed so much,” she said. “I can remember our family going through the Depression and World War II and a lot of other things that happened back then.

“We had an outhouse for a long time,” Caroline recalled. “I didn’t have indoor plumbing in a house until 1941, when I married John J. Vlieg.”

The couple was married briefly and had one child, John Edward Vlieg, 80, who she said was named after his two grandfathers.

Having experienced her share of changes, challenges and blessings, Caroline remains steadfast in what the believes is most important in life.

“That’s my faith and trust in God,” she said. “I feel that without Jesus Christ in our lives, we have no hope for salvation.

“If we read the Bible and follow the word of Lord, God will reward us in the end, and we will be free from suffering.”

Before moving back to Imlay City recently, she spent the previous 40 months as a resident at the Suncrest in Lapeer. While she said the staff was kind and supportive, she finds that living in a home with her new caretakers is more to her liking.

“I’d rather be with family and friends,” Caroline said. “I’m so thankful for all these people who care for me. “Being with other people who care about you is what makes the world go round.”