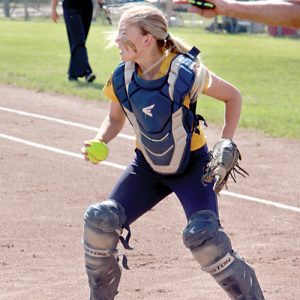 Capac catcher Chloe Schocke looks to throw out a runner in Saturday’s regional.

CAPAC — The Capac softball team put up a good fight, only to drop an 11-6 outcome to Ubly in a Division 4 regional semifinal confrontation last Saturday.

“The Lady Chiefs had a great season,” Capac Coach Ashley Mousseau commented. “We finished 22-7 overall and took second in our league with an 8-4 mark,” she noted.

“This group has a drive for achievement. They do the hard work it takes to be successful and go the extra mile every time. Winning a district title for the second straight year was a great addition to our season.”

In Saturday’s battle, Capac spotted Ubly a 2-0 edge after one inning was over with.

That was followed by a scoreless second inning.

The next two innings would see Ubly outscore Capac by identical 1-0 counts.

Down but not out, Capac rallied with a 4-3 fifth inning edge and a 1-0 sixth inning advantage. That trimmed their deficit to 7-5 at the time.

However, that proved as close as they would get. Ubly saw to that with a 4-1 seventh inning edge, putting the finishing touches on an 11-6 win.

Schneider added a pair of stolen bases to Capac’s cause.