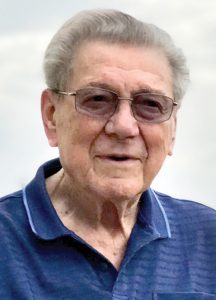 Anton “Toni” Hammang, age 89, a long time resident of Imlay City, passed away Wednesday, June 8, 2022 with his family at his side. He was born September 16, 1932, the son of Joseph and Anna (Teschler) Hammang in Perlez, Yugoslavia. When he was 12, his family fled to Mittersill, Austria in the middle of the night with horses and wagon to escape the war. He attended school and received his Technical Degree in 1955 in Austria after his apprenticeship. He met his soon to be wife, Roswitha Wimmer, in 1955. He then came to the United States to look for a job. He returned to Salzburg, Austria where he married his beloved wife on April 23, 1957. They both moved to Detroit and then to Warren, where they started their family. He worked as a tool and die maker at Atlas Tool & Die, retiring after 35 years.

He loved watching sports and always had sports on TV, especially the Detroit Redwings and Detroit Tigers. Toni was an avid outdoorsman enjoying hunting and fishing with his buddies in Oscoda. He was loved by many and was known for his motto “Don’t discuss politics, religion and money.” Toni will be missed by many.

Memorial donations may be made to McLaren Hospice in Anton’s honor.

Share a story or photos at Anton’s Memory Page at www.muirfh.com