Almont bows out in regionals 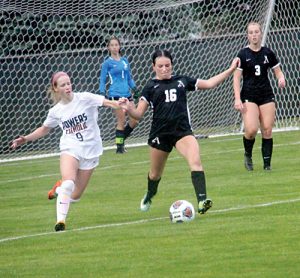 Williamston High School is where the action unfolded.

“The girls fought hard against Flint Powers tonight,” Almont Coach Mike Kepler commented. “I think it was good for our young players to see what the level of play at the regional level is like,” he noted.

“It gives us something to build for and I am excited to see what this program can accomplish in the years ahead. This postseason run was one to remember. The hard work the girls put in was rewarded with a district championship. That is the standard, repeat next year as district champs and make a regional run.”

In Wednesday’s battle, Flint Powers jumped out to a 1-0 edge with 39:22 showing on the first half clock.

Just 2:28 later, Flint Powers found the back of the net with a shot that widened the gap to 2-0.

Flint Powers then increased their cushion to 3-0 with 27:01 to play before halftime.

The remainder of the opening half would prove scoreless.

The second half would see Flint Powers collect one more goal, while holding Almont to none. That left Flint Powers up 4-0 when the final second ticked off the clock.

Lindsay Wilson drew the goalkeeping assignment for Almont that day. Wilson was credited with 14 saves.

Center backs Katie Cafek and Avery Peake and outside backs Angelina Williams and Taylor Garabedian added strong defensive showings for Almont that day, according to Kepler.