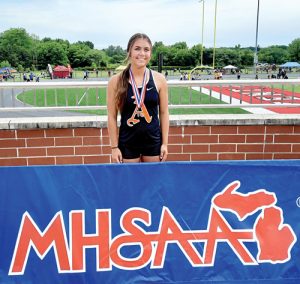 Kent City High School is where the action unfolded.

Devin Johnston led Almont with a pair of placewinning efforts that day. Johnston took second with a 200 dash time of 25.71 seconds and her 100-meter dash clocking of 13.0 seconds paid off with a seventh.

For her performances, Johnston earned All-State accolades (given to the top-eight finishers in each event).

Paige Feldman had the next best Almont individual event showing. Her high jump clearance of 4 feet 9 inches placed her 15th.

The Almont 400 relay of Montserrat Coronel, Chloe Brady, Johnston and Feldman ranked 15th as well. They stopped the watch at 52.82 seconds.

Molleigh Rinke also represented Almont that day. Her discus toss of 92 feet 3 inches paved the way to a 19th.