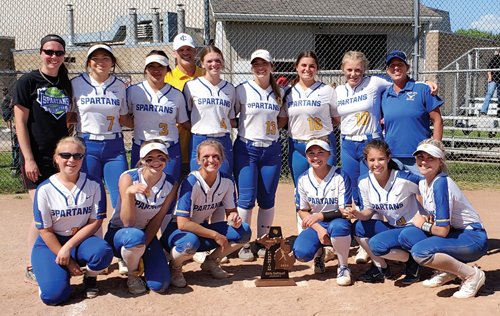 The Imlay City softball team takes time out for a photo after earning a top finish at their Division 2 district last Saturday.

It marked the second straight year Imlay City has won a district title.

Imlay City started things off with a 6-5 semifinal victory over Cros-Lex.

Jaya Forti (two singles, a double and a triple) and Chloe Bruman (four singles) led Imlay City’s offensive attack. They were backed by Yesenia Rojas (two singles) along with Reese Schmidt and Brie Hund (a single each).

Natalie Stone was the winning Imlay City pitcher. She allowed seven hits over seven innings, struck out one and walked two.

Imlay City followed that outcome up with a 15-1 victory over Yale.

Jaya Forti was Imlay City’s pitcher of record. She gave up three hits over three innings, struck out five and walked one.

With their finish, Imlay City advances to this Saturday’s regional at Detroit Country Day. There they will square off versus the hosts in a semifinal contest which lists a 10 a.m. starting time.