From Galileo to DaVinci, to “Honest Abe,” the greatest names in American and world history were there to share their personal stories with visitors. 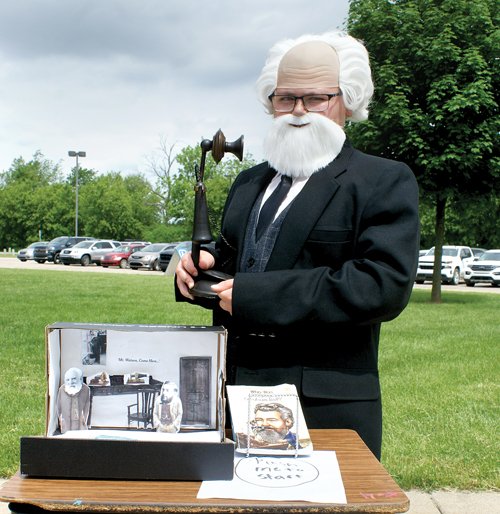 Makenna Brown, 10, was proud to represent American aviator Amelia Earhart, who she said represented a spirit that now inspires countless young people to reach for the stars.

“I chose to be Amelia because she was adventurous, daring and brave,” said Makenna. “She didn’t let anything stop her.”

“I think a lot of young people don’t know about him, and that he is famous for painting the Mona Lisa,” she said. “I like to paint myself, but I’m not really all that good at it.”

Dominic Beranek, 10, chose to be Alexander Graham Bell, because of how the telephone transformed our ability to communicate.

“He came up with a way to make it easy to talk to people,” he said. “He also started the Bell telephone company.”

Also taking part in the wax museum were fourth-graders Logan Barnum and Charlie Glosser, each of whom portrayed the famous German physicist, Albert Einstein.

Both boys suggested that the other was an imposter and had absolutely no understanding of the concept of E=MC-squared.

“I think he must be from an alternate universe, because I’m the real Einstein,” said Logan.

Charlie countered that he was much smarter than his phony counterpart.

Ms. St. Onge pointed out that each student was required to select and research the famous person in preparation for the Wax Museum.

“They read the material and completed detailed notes to keep their information organized,” she said. “They creatively thought up a costume that would allow them to become the famous person.”

She added that the students were required to write a speech to present their projects to the visitors, including parents, grandparents and other students.