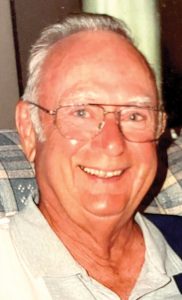 Charles Halbert, age 87, of Imlay City, MI died Sunday, June 5, 2022 at McLaren Flint Region Medical Center of Flint, MI. Charles Levi Halbert was born February 1, 1935 in Imlay City, MI. He was the son of the late Henry and the late Leona (Chrivia) Halbert. Chuck was a graduate of Imlay City High School, Class of 1953. He married Maxine Mina Millikin on September 19, 1953 in Brown City, MI. Chuck has lived in Imlay City most of his life.

Chuck served in the U.S. Army during the post-Korean War era, being discharged in March of 1961. He was employed by General Motors Tech Center as a design engineer and model maker. He worked at the General Motors Tech Center in Warren for 30-plus years. Chuck enjoyed hunting and fishing and he was a big “car guy.” He loved playing and watching baseball and football when he was younger; and played volleyball with his buddies at work. He enjoyed going to the casinos and up north to their cottage.

Chuck was preceded in death by his parents; a brother, Russell; and a sister, Dorothy.

Please be sure to sign the online register book at www.muirbrothersfh.com to share your memories and condolences with the Halbert family.