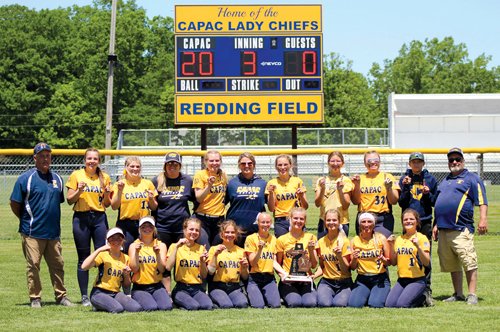 The Capac softball team poses for a photo after wrapping up a Div. 4 district title with a convincing 20-0 win over Genesee.

CAPAC — The Capac varsity softball team outscored their opposition by a combined 30-2 count en route to a first-place finish at a Division 4 district it hosted last Saturday.

Capac began their title-producing run with a 10-2 win against Dryden.

Madalyn Roberson was the winning Capac pitcher. She struck out 14 and walked none along the way.

Capac followed it up with a 20-0 championship game victory over Genesee.

Hansen (three doubles) paced Capac’s offensive attack. She was backed by Roberson (a single and a double), Skielar Tesnow (a triple), Schneider, Helzer, Moran and Rickman (a single apiece).

Roberson was Capac’s pitcher of record. She threw a no-hitter over three innings, struck out seven and walked one.

With the results, Capac moves on to Saturday’s Division 4 regional at Unionville Sebewaing. There they will meet Ubly in a semifinal clash set for 10 a.m.