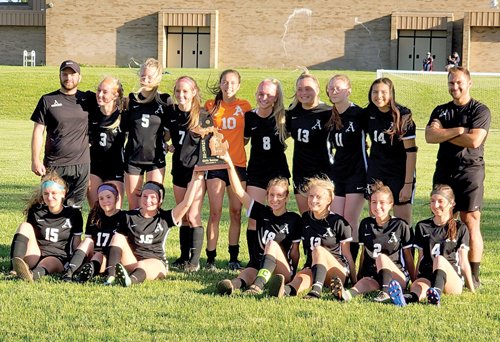 Lakeville is where the action unfolded.

With the outcome, Almont advances to this Wednesday’s regional at Williamston High School. There they will meet Flint Powers in a semifinal matchup which lists a 7 p.m starting time.

In Friday’s title clash, Almont and Richmond scored once each during half number one.

The second half proved scoreless, sending the game on to overtime.

In the first half of overtime, Almont netted two goals and Richmond managed none.

That was followed by a scoreless second half of overtime, leaving Almont with a 3-1 win to celebrate.

Jesse Kautz (via a penalty kick) had Almont’s goal in regulation play.

She added two more goals, both of the unassisted variety, during the first half of overtime.

Lindsey Wilson got the win in net for Almont. She wound up with 13 saves.