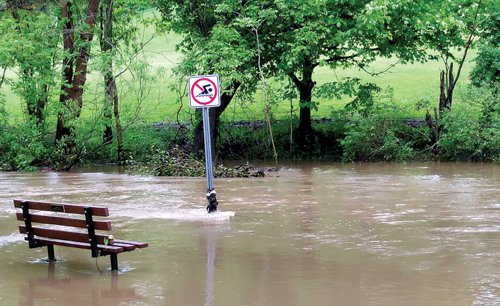 Amenities were underwater at the Almont Community Park when the Clinton River overflowed its banks last week.

ALMONT — A period of sustained and sometimes torrential rains fell Friday afternoon, resulting in flooded streets and basements in the Village of Almont.

The heaviest rainfall began at around 3 p.m. and fell continuously for a period of more than an hour.

Almont Police were posted at various intersections to divert traffic away from the flooded areas; including at the intersection of Almont Rd. and Surrey Drive, where westbound traffic was redirected to alternate routes.

Another area affected by heavy flooding was the Almont Community Park, where the Clinton River runs through; as well as at the Howland Road lift station, which was partially submerged.

The lift station is designed to move wastewater or sewage from a lower to higher elevation.

Farley noted that further challenges were presented because of the continued infiltration into the village’s water system.

While the rains were heavy and sustained, Farley said the wastewater plant’s four 500,000-gallon storage tanks were successful in containing any potential overflow.

“It was an intense downpour, but our systems and storage tanks did their jobs and held up,” he said. “There was no overflow into the (Clinton) river, which used to be a concern.

“Right now there is zero health concern for residents and the village’s drinking water is clean as a whistle.”