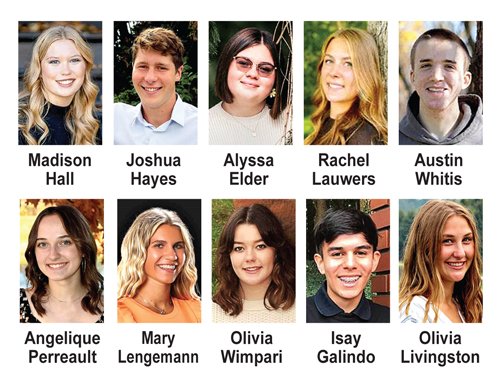 IMLAY CITY — Graduation day is nearly here for Imlay City High School’s Class of 2022. Seniors will receive their diplomas this Sunday, June 5, at a 2:30 p.m. ceremony in the high school’s gym.

Among those celebrating that memorable day will be the following ten graduates who earned the top academic honors while in high school.

Madison carries a 4.0 grade point average and is the daughter of Karen and Stephen Hall of Metamora. Madison has been a part of National Honor Society, class council and the Girls’ varsity golf team throughout her high school career. While in the National Honor Society, Madison was a co-chairperson for the group’s tutoring committee. Madison’s after school graduation plans are to pursue a degree in chemistry, either at Lawrence Technological University or the University of Michigan.

Madison’s parents are the most influential people in her life as they both have incredible work ethics and support her in everything she does.

Joshua carries a 4.0 grade point average and is the son of Heather and James Hayes of Lynn Twp. During his time here at Imlay City High School, Joshua has participated in the National Honor Society, basketball, soccer, track and field, bowling, drum major of marching band, and wind ensemble. After graduation, Joshua plans to pursue a career in mechanical engineering at the University of Michigan in Flint and become an automotive engineer.

His dad is the most influential person in his life due to his work ethic, faith and positive attitude.

Alyssa Elder has attained a 4.0 grade point average over her four years of high school. She is the daughter of Tracy Richie and John Elder of Imlay City. Alyssa is a member of the National Honor Society and is a Scholarship co-leader. She is a member of the Spartan marching band and was co-leader of Drumline, in which she participated, along with jazz and wind ensemble. Alyssa also served as treasurer of her senior class council. In her spare time, Alyssa works at Lucky’s Steakhouse, here in Imlay City, as a hostess. In the fall, Alyssa plans on attending the University of Vermont to major in biology. The most influential person in her life is her mother as she has always encouraged her to pursue anything that her heart could imagine.

Rachel Lauwers has earned a 4.0 grade point average during her high school career. Her parents are Jennifer and Matthew Lauwers of Almont. Rachel has participated in National Honor Society, secretary of student council, marching band, track and field, bowling and is involved in her church choir. Rachel was also the recipient of the DAR Good Citizen Award. Rachel’s future plans are to attend Macomb Community College to pursue a degree in the physical therapy field.

Rachel considers her close family members as the most influential people in her life.

Earning a 4.0 grade point average during his high school career is Austin Whitis. His parents are Kathleen Truemner and Corey Whitis of Imlay City. Austin has received many academic awards during his high school career. During his time in ITnet he has completed the Cicso’s IT Essentials certification which covers the fundamentals and advanced concepts of computer hardware and software, troubleshooting skills, networking, security and IT professionalism. He has become an MTA for Windows OS fundamentals and also completed the Startsafe, Staysafe workplace training course along with the NDG Linux Essentials course. Due to his accomplishments, he was named in the top 25 of the Governor’s High School Cyber Challenge. Austin’s plans are to attend Michigan State University to study games and interactive media.

The most influential person in Austin’s life was his 5th grade teacher, Mrs. Buckner.

Angelique Perreault has earned a 4.0 grade point average during her four years of high school. Her parents are Kim and James Perreault of Imlay City. During her high school career, she participated in marching band all four years, varsity tennis for three years, recycling, class council, and the National Honor Society. She plans to attend Saginaw Valley State University after graduation to study pre-med.

Her sister, Dominique, is the most influential person in her life. While growing up she always influenced her and continues to do so, even now that they are older.

Mary Lengemann has earned a 3.94 grade point average during her four years of high school. She is the daughter of Julia and Bill Lengemann of Imlay City. Cumulatively, Mary has earned the following accolades: varsity basketball (four years plus captain), varsity track (four years), varsity cross country (one year), AAU basketball (four years), BCAM 1st team all-state, BWAC MVP, and also qualified for eight events at the state championships. Mary has served on the school environmental club and, during the COVID-19 shut down, she was a student leader in the “Let us Play” movement, speaking publicly at the Capitol in Lansing. She has coached 6th grade basketball and helps out at a local soup kitchen each month. She also serves as a lector at her church and works at other regular church events when needed. During her senior year, she has served as National Honor Society president, art show volunteer, blood drive assistant and participated at Weston Career Day Exploration. Mary has signed, and will play basketball, at Embry Riddle Aeronautical University while pursuing a career in aviation.

The most influential people in Mary’s life are her family, her grandparents and the game of basketball.

Olivia Wimpari has earned a 3.89 grade point average during her four years of high school. Her parents are Suzette and Daniel Wimpari of Imlay City. Olivia has participated in marching band for four years, girls’ varsity tennis for three years, National Honor Society, wind ensemble and concert band. She has achieved awards for All-Academic Team and language arts. She also received her 1st year pin, varsity letter and academic letter, along with medals from MSBOA Solo and Ensemble festivals throughout her high school career. Olivia plans to attend either the University of Michigan or Central Michigan University to pursue a career in fashion journalism.

Her sister Annika is pursuing her dreams and is encouraging Olivia to pursue hers, which is why she is the most influential person in her life.

Isay Galindo has earned a 3.83 grade point average during his high school career. He is the son of Luz Munguia Capistran and David Galindo Zepeda of Imlay City. Isay has attended the Lapeer County Education and Technology Center the last two years and he plans to continue with a career in collision repair by either attending a trade school or college to continue his education. While he’s not set on a specific college or trade school, he’s been looking into Oakland Community College.

Isay’s most influential person in his life is his father. He has pushed him to become a better person and has taught him to always work hard.

Olivia Livingston has earned a 3.44 grade point average during her high school career. She is the daughter of Amy Livingston of Imlay City. Olivia has participated in class council as president the last four years. Also, during her four years of high school, she has participated in varsity basketball, varsity softball, National Honor Society and Spartan Nation. Olivia’s plans after high school are to pursue a career in public relations at Western Michigan University.

Olivia credits her mom as being the most influential person in her life as she pushes her to be and do her best in all she does.

Editor’s note: Imlay City Schools included the following message with this release: “A large number of schools no longer use the traditional classification of Valedictorian and Salutatorian, and many other schools are moving in that same direction. At Imlay City High School, we believe the distinction to be an important one, and one worthy of recognition. In 2007, the guidelines for qualification and selection for these distinctions were reviewed to emphasize performance on the ACT or SAT examination and to reward students for attempting the most rigorous course schedule possible. The guidelines were designed to more closely align them with those used for special distinction at the university level through the Phi Beta Kappa system. This system was also adopted by the Detroit News Scholar program and is currently used by the Blue Water Area Conference to determine its highest academic honors.”