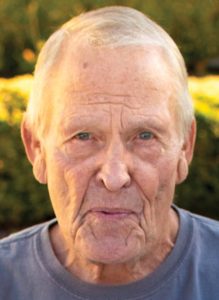 Billy “Bill” Alverson, age 81, of Imlay City, MI died Wednesday, May 25, 2022 at his home surrounded by his loving family. Billy Raymond Alverson was born September 2, 1940 in Humphrey, AR. He was the son of the late Raymond and the late Ethel (Burke) Alverson. Bill grew up in Arkansas until the age of 12 when he and his family moved to Michigan. He attended Roseville High School. He married Barbara Miller on April 29, 1961 in Mt. Clemens, MI, where they then raised their three children. Bill and Barbara moved to the Imlay City area 27 years ago. He was a retiree from Chrysler Sterling Stamping after thirty years of employment.

Bill and Barbara attended the West Goodland United Methodist Church and he helped with building the addition of the church. Bill found joy in hobbies like going to garage sales, bird watching and gardening; however, his true passions were hunting, fishing and mechanical repairs. He was a devoted husband, father and grandfather who not only loved his family but had a strong love for the Lord.

Bill was preceded in death by his parents, Raymond and Ethel Alverson; great-grandchildren, Cali Jo and Gemma; and his brother, Buddy.

A service is not planned at this time.

Those wishing to make memorial contributions in Billy’s name may direct them to St. Jude Children’s Research Hospital or to the Lapeer Pregnancy Center.

Please be sure to sign the online register book at www.muirbrothersfh.com to share your memories and condolences with the Alverson family.