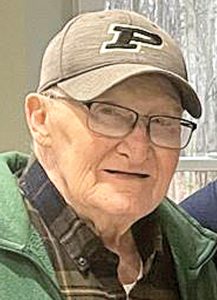 Dick was born on November 15, 1935 in Rochester, MI. He attended Dryden High School, and graduated from Michigan State University where he received an associate degree. Dick served in the United States Army for two peaceful years. After the army, Dick managed a successful excavating business before he and his family settled in Brown City, MI. There he was able to pursue his passion for farming, cultivating land and raising dairy cattle. Even when retired from farming, he enjoyed nothing more than offering advice to young farmers and long drives where he could see the progress of the crops.

He was preceded in death by his parents, Harold and Althea Duckert; and his sister, Joann Thomas.

Dick is survived by his beloved wife of 60 years, Stella (Dombrowski); his children, Deanna, Debora (Mike Grills), Danise (Don McAnelly), Doreen (Chuck Anzalone), and Destain (Suzanne Duckert); his seven grandchildren, Gabrielle, Lexie, Lindsay, Andy, Garrett, Oliva and Alec; as well as his two sisters, Janet Glasgow and Joyce Danforth. Dick was blessed both as a father, friend, and papa to his loving family.

The funeral was held on Friday, May 20 at Carman Funeral Home in Brown City, MI. Burial followed in Lynn Township Cemetery.

Memorials may be made to Brown City Fellowship Church.