Class of 2022 to receive diplomas on Sunday, June 5 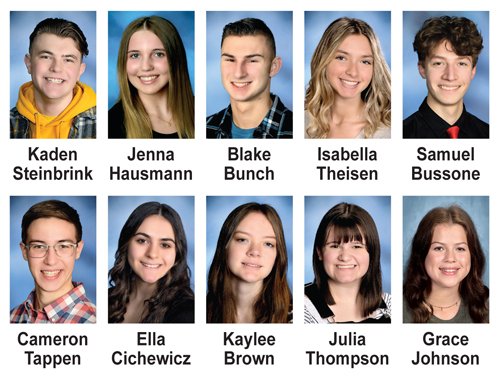 ALMONT — Almont High School will hand out diplomas to graduates on Sunday, June 5. Seniors, along with family, friends, teachers and other school staff will pause to celebrate their many accomplishments, including a myriad of academic achievements. What follows are those graduates whose academic performance earned them a spot among Almont High School’s Class of 2022 Top Ten.

Kaden Steinbrink, the son of Jason and Kathryn Steinbrink of Almont Township, is the Almont High School valedictorian and will graduate with a GPA of 4.272.

He was selected for the BWAC Academic All-Conference Team and received WXYZ-TV’s “Brightest and Best” award. Kaden was enrolled in the Pre-Engineering program offered through the University of Michigan-Flint and the Lapeer County Education and Technology Center during his senior year and was recently awarded semi-finalist accolades in the U of M-Flint Zillion Solutions entrepreneurial competition. Kaden is also taking dual enrollment courses through Macomb Community College where he made the Dean’s List. In addition to his academic accomplishments, Kaden was involved in many other facets of AHS student life throughout high school. He has been a member of the robotics team for three years and has also played JV and varsity golf all four years of high school. He is a member of the LINKS peer-to-peer program and is the president of the National Honor Society where he participates in the Pen Pal NHS service project in collaboration with The Bells of Almont and assisted with the school blood drives. Lastly, the school-wide pep assemblies were always exciting and energized with Kaden’s resounding voice firing up the student body to show their Raider spirit.

Kaden plans to attend University of Michigan – Flint in the fall to obtain a degree in mechanical engineering.

Almont High School salutatorian, Jenna Hausmann, the daughter of Hans and Traci Hausmann of Almont Township, has attained a GPA of 4.202.

Throughout her high school career, Jenna has participated in varsity tennis for four years, JV volleyball for two years, and JV golf for one year. In her junior year of tennis, she was awarded first place in third singles in the Blue Water Area Conference (BWAC) and was named First Team All-Conference. Jenna is a two-year member of the Student Council and National Honor Society and currently holds the position of secretary of both organizations. As an NHS service project, Jenna organized a food drive for a local homeless shelter. Jenna was selected for the BWAC Academic All-Conference Team and received the WNEM TV-5 Mid-Michigan’s “Best and Brightest” award.

Upon graduation, Jenna will attend University of Michigan – Ann Arbor and is considering studying in the communications and media field, but at this time is undecided on her major.

Blake Bunch is the son of Brian and Kristie Bunch of Almont. Blake is currently maintaining an outstanding 4.176 GPA and is ranked third in the Almont High School 2022 graduating class.

In recognition of his academic success, Blake was selected for the BWAC Academic All-Conference Team and received the WNEM TV-5 Mid-Michigan’s “Best and Brightest” award. As an athlete, Blake participated in JV football for two years and varsity football for two years, where he held a position on the leadership team. He also participated in JV baseball for one year and varsity baseball for two years, leading the team as captain his senior year. In addition to his many other athletic recognitions, Blake has been presented with the following awards: Academic All-District for baseball, First Team All-BWAC for football, and Academic All-State for football. He also participated in one year of robotics during the start of the pandemic, however resigned from the club to focus on his studies in the Lapeer County Early/Middle College (EMC) Program.

Blake plans on attending University of Michigan – Flint in the fall and major in mechanical engineering.

Ranking fourth in the Almont Class of 2022, with a 4.093 GPA, is Isabella Theisen, the daughter of Ralph and Kari Theisen of Dryden.

Isabella attended Eisenhower High School during 9th and 10th grade. At Eisenhower she received the presidential award for academic excellence. She also participated in the National Junior Honor Society (NJHS) and held the office of treasurer. Isabella transferred to Almont Schools for her junior year earning Academic Excellence awards in math, science, English, and AP U.S. history. She has played varsity softball for four years and varsity basketball for one year. She is also a two-year member of the Student Council and one-year member of the National Honor Society, assisting with the blood drives and bottle drives.

In the fall, Isabella is planning to attend Alma College where she will minor in biochemistry and major in pre-medicine.

Samuel Bussone, the son of Robert and Jennifer Bussone of Almont Township, is graduating fifth in his class with a 4.044 GPA.

He participated in JV golf for one year, powerlifting for one year, varsity basketball for one year, and varsity track for two years. He also played singles on the varsity tennis team for four years, where he was selected First Team All-State his junior and senior year and was named team captain during his senior year. Sam served as the treasurer for the Rachel’s Challenge club for two years. While a member of Rachel’s Challenge Sam participated in the establishment of Rachel’s Closet and used his artistic ability to design the Rachel’s Challenge T-shirt. Sam was also selected for the BWAC Academic All-Conference Team and was the recipient of the Daughters of the American Revolution (DAR) Good Citizens Award.

Sam will be attending University of Detroit Mercy in the coming fall, majoring in civil engineering.

Cameron Tappen is the son of Michael and Tracy Tappen of Attica. Cameron is a proud member of Boy Scouts of America (BSA) and is working toward earning the prestigious Eagle award. He has balanced an outstanding 4.035 GPA while pushing himself to be active in the following organizations: National Honor Society for two years where he was a member of the school recycling team, BSA for all four years of high school, serving as a scribe, patrol leader, and librarian, robotics for one year, and Upwards which has given him a wonderful opportunity to work as an assistant coach to young, aspiring basketball players for three years.

On top of this, Cameron is constantly trying to improve his personal fitness and teamwork skills by participating in JV bowling for two years, freshman and JV baseball for two years, and is currently in his first year of varsity track. Cameron is also a four-year member of the Almont High School Band where he plays alto-saxophone and has led the saxophone section for two years. He was also selected for the BWAC Academic All-Conference Team.

Cameron plans to attend Kettering University in the fall, majoring in Mechanical Engineering with ambitious dreams of working for NASA in the future.

Ella Cichewicz, the daughter of Tony and Jodie Cichewicz, is graduating with a 3.939 GPA.

Ella received the Society of Women Engineers Marie Curie Award in her junior year for math and science achievements and she was awarded third place in the National Association of Conservation Districts’ poster contest. Throughout her time at Almont, Ella participated in varsity basketball and cross country for one year each and varsity track for three years. She was also a member of Almont’s varsity powerlifting team for three years and qualified for the state powerlifting competition all three years, placing in the top five her senior year.

Ella will continue her education at a community college and then plans to transfer to a university to pursue a degree in either veterinary medicine or forensic science.

Kaylee Brown is the daughter of Clint and Michelle Brown of Allenton. She ranks eighth in the graduating class of 2022 with a GPA of 3.93.

Kaylee has been playing tennis since fourth grade and has been on the varsity tennis team for all four years of high school. She plays second singles and was named team captain for her junior and senior year. She placed second in BWAC in her freshman and junior year and was awarded First Team All-BWAC her junior year. Academically, Kaylee participates in the Lapeer County Early/Middle College (EMC) Program and is planning to attend Baker College for her fifth year of studies in the EMC Program.

Julia Thompson is the daughter of Jason and Jennifer Thompson of Almont, has attained a 3.922 GPA and will graduate with a ranking of ninth in her class.

Julia has been involved in the drama program for three years and has performed in three plays, including leading roles in The 25th Annual Putnam County Spelling Bee and this year’s featured play, The One-Act Play That Goes Wrong. Julia has also been a member of the Almont High School marching and concert bands for four years and served as the clarinet section leader for one year. She participated with the robotics team for one year.

Julia will be attending Saginaw Valley State University in the fall and is currently undecided on her major, but plans to pursue studies in an art related field.

Grace Johnson is the daughter of Erik and Jennifer Johnson of Almont, and graduates tenth in her class with a GPA of 3.886.

Grace will be attending Michigan State University in the fall and plans to major in biology.

Editor’s note: Many thanks to Joyce Burkland, secretary to the principal at Almont High School, for compiling this feature.