ALLENTON — Members of the local chapter of Blue Star Mothers of America (BSM) are seeking funds and donations to support local veterans and their families.

Lahr said the organization’s daily and continuing mission is to provide support and assistance to causes that promote patriotism.

“We will never, ever, forsake our troops, veterans or the families of our fallen heroes,” she said. “The military represents all aspects of America, as does our organization.”

Lahr noted there are currently about 6,000 Blue Star Mothers from more than 200 BSM chapters nationwide. 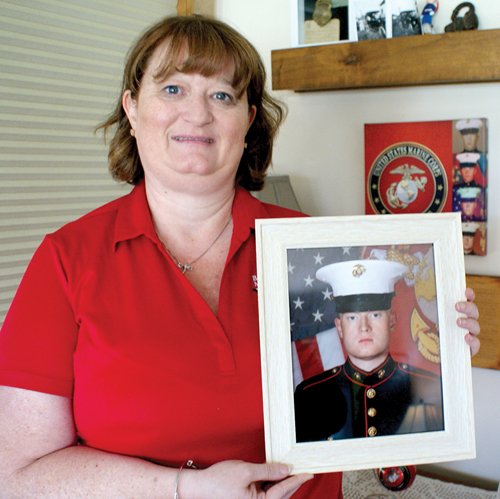 Tanya Lahr holds a photograph of her son, Travis, a U.S. Marine Lance Corporal who is currently serving in Japan.

“We are mothers, stepmothers, grandmothers, foster mothers and female legal guardians who have children serving in the military, guard or reserves, or children who are veterans,” Lahr said. “We are a non-political and non-partisan organization that supports one another and our children, while promoting American patriotism.”

Both Tanya and her husband, Tim, have a very personal reason for supporting the cause.

Their 24-year-old son, Travis Lahr, is a Lance Corporal in the U.S Marine Corps., who has been stationed in Iwakuni, Japan since 2018.

“I think only other military mothers, fathers and families can fully understand and appreciate how we feel about our sons and daughters who have served, or are now serving in the military.

“There is a special bond that exists, because we all share pride in what they are doing for our country.”

Local residents will have a chance to support local veterans and active duty personnel on Saturday, June 11, when Blue Star Mothers Chapter #180 presents a Bowling Fundraiser at Hideaway Lanes at 4550 Howland Rd. in Almont, starting at 5 p.m.

The fun-filled family event will include three games of bowling and shoes for $20, with all proceeds going to support military and veterans organizations.

The event will also include awards, raffles, food, a silent auction, and a “Wall of Heroes.”

For further information about the fundraiser, or to make a donation to Blue Star Mothers Chapter #180, contact Tonya at 810-614-1571.