The top-two placewinners in each event plus anyone who meets or surpasses a state set time, height or distance advances to the state finals June 4 at Kent City. 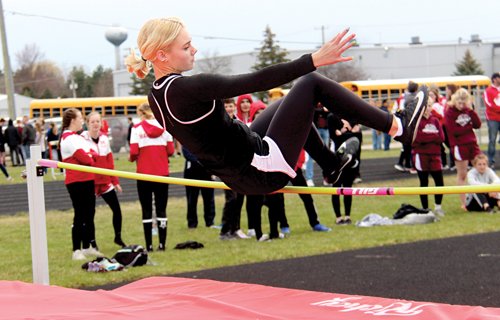 Almont’s Paige Feldman competes in the high jump earlier this season. She took second in the event Saturday at a Div. 3 regional.

The Almont 400 relay of Paige Feldman, Montserrat Coronel, Lilylynn Martin and Johnston took first as well. They were timed in 53.45 seconds.

The Almont 3200-meter relay of Ayla DeLaurier, Haley Dempz, Molly Kline and Martin pulled up third as well. They were timed in 11:52.51.

The Almont 800 relay (Madison Niedermaier, Rylie Ferman, Christy Trusler and Dempz) and 1600-meter (Lauren Webster, Dempz, DeLaurier and Coronel) were seventh as well. They stopped the watch at 2:11.44 and 4:50.8, respectively.