GOODLAND TWP. — On June 11, approximately one month after Saturday’s public hearing, the Goodland Township Planning Commission plans to reconvene again at the Knights of Columbus Hall to decide the fate of a proposed commercial solar energy facility.

After taking in more than four hours of public comment on Saturday, May 14, Chairman Mike Bissett said the board needed time to sift through all the information presented before they could make a decision on the special land use permit and site plan.

Orion Renewable Energy Group wants to construct 15 foot tall solar panels on 826 acres in Goodland Township. The development would encompass approximately 1,700 acres in total in the eastern portion of the township. 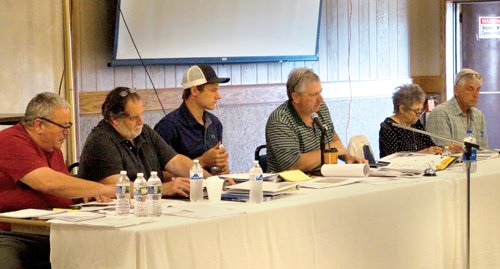 Supporters of the plan, many wearing “Harvest the Sun” shirts, said they believed the proposal would help family farms, bolster the local economy with extra tax revenues and meet the need for greener forms of energy.

“Solar would help me keep going,” said farmer John Gilliland, a Crowe Road resident who raises beef, hay and other crops and has enrolled some of his land with Orion.

Those opposed to the development said they believed it would harm the environment and be detrimental to wildlife, decrease property values and doesn’t fit in a rural setting, among other concerns.

“It does not belong in our backyard,” said resident Cindy Hummel.

“Solar panels are going to ruin the good land of Goodland Township.”

Citizens had their chance to address the planning commission after presentations from Corey Christensen, a planner with Rowe Professional Services, and various representatives from Orion.

Christensen said that the proposal met the requirements of a special land use permit other than the solar development could be considered “inharmonious” with current land use.

Representatives from Orion said, if their plan is approved, they will exceed Goodland’s solar ordinance requirements for landscape barriers; plant a special seed mix under the panels that will offer habitat for pheasants, pollinators and song birds and conduct soil testing before construction and after any potential damage to the panels to determine if any contamination occurs. They are also willing to provide extra bond dollars for ongoing landscape maintenance.

Additionally, after the panels have been decommissioned some 25 to 30 years down the road, the company has pledged to not dispose of them in the township.

Orion’s attorney, Mark Gershon, said the one modification they are asking from the township is to extend site plan approval from one to three years. Traditionally, applicants have one year from approval to start construction or they’re required to re-submit a site plan. Gershon said they anticipate procurement issues for necessary equipment and need time to negotiate agreements with customers who want to purchase the power generated plus secure financing for the $70-100 million project.

The commission’s next regular meeting is tomorrow, May 19, at the township hall, starting at 7 p.m.

A special meeting to address the solar development will be held on Saturday, June 11, at 9 a.m. at the Knights of Columbus Hall.