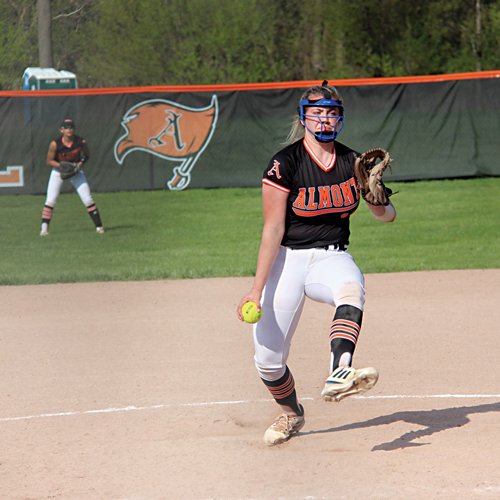 Myah McLean, of Almont, delivers a pitch to home plate in a game at home this past week.

In the opener, Almont claimed a 2-0 win at Caro’s expense.

Myah McLean was Almont’s pitcher of record. She allowed three hits, struck out 10 and issued no walks.

It marked her 10th shutout this season, breaking the previous school record set by Veronica Watson during the 2016 campaign.

In the second game, Almont posted an 8-2 victory over Caro.

Theisen (two singles and a double), Devin Johnston and Grace Koenig (two singles each), Abby Geml and Kylie Tennant (a double apiece) along with Brooklyn Bunch and Roszczewski (a single each) contributed Almont’s hits.

McLean and Geml shared the pitching responsibilities for Almont. They gave up eight total hits, struck out nine and walked none.