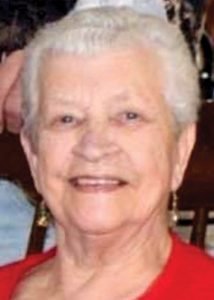 Grace Gerrard, age 92, of Almont, MI (formerly of Herford, AZ) died Saturday, May 14, 2022 at Angela’s House Assisted Living of Imlay City, MI. Grace Amelia Wiley was born January 20, 1930 in St. Thomas, Ontario, Canada. She was the daughter of the late Watson and the late Mabel (Sommerville) Wiley. She married Harry William “Bill” Gerrard on May 28, 1949 in St. Thomas, Ontario, Canada. Grace and Bill lived in Eastpointe, MI from 1950 until 1986 when they moved to Herford, AZ. She was preceded in death by her husband, Harry, in 2011. Grace moved back to Michigan in 2000 to Shelby Township and lived at the Bells in Almont for the last 3-4 years.

She was mostly a homemaker, raising her family. Grace was a member of the Red Hat Society and a member of Montezuma Muzzleloaders in Arizona.

She was preceded in death by her husband, Bill Gerrard; son-in-law, Michael Marceau; her granddaughter, Brigette Marceau and her siblings, Hugh, Lena, Margaret, Duncan and Donna.

The family will be available for visitation 11 a.m. -1 p.m., Saturday, May 21 at Muir Brothers Funeral Home of Imlay City. In leau of flowers, the family ask for donations to be made to The Salvation Army, Eastern Michigan Division, 16130 Northland Drive, Southfield, MI 48075-5218.

Please be sure to sign the online register at muirbrothersfh.com to share condolences and memories with the Gerrard family.