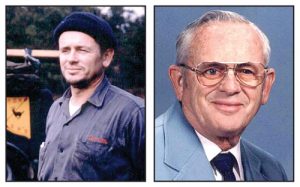 He was a lifelong member of the Almont community and he prided himself on hard work, honesty, family, faith and balance. A farmer at heart and entrepreneur, he had successful businesses in Hamilton Electric and Hamilton Farm Tiling. In 1950, he joined the Almont Fire Department, serving 37 years as a volunteer. He was named chief in 1968 and retired in 1986.

He was strong in faith and loved being a part of the church choir where his baritone sang loud over the decades. Upon retiring he had his coffee shop mornings with the boys where they would discuss all the community events and partner in the enthusiasm. Another ROOT in his family and friends is the Almont Archery Club. As one of the founding members, many family heritages began in 1946. His family and friends of the club will carry on that tradition of camaraderie and friendship with the same vigor as the founding fathers for future generations.

For all who knew Norm and will remember him forever, we say thank you.